The Silent Sea is a unique sci-fi set in the not so far future. The story is from an apocalyptic world where the earth suffers from huge water scarcity. And to fulfil its needs, scientists travel to the moon where they already had an existing research station with a scary history. The research station on the moon named Balhae had a tragic mishap that lead to the death of all the researchers inside keeping only two doctors and a child as survivors. The protagonist Song Ji-an played by Doona Bae starts working with the research team even after witnessing his sister’s death at the Balhae research station. When the team reaches the moon to know the secrets behind the deaths they witness a weirdly different infection on the bodies of the diseased researchers. What leads to such an infection? How the scientists are going to solve the problems? To know the nooks watch the series of The Silent Sea ASAP!

Why should you watch The Silent Sea?

The Silent Sea won’t disappoint you if you like feasting your eyes on every sci-fi movie in existence. The eight-episode long series show a probable future of earth with twists not much relatable to the present world. The most treasured resource, water vanishing from our world is horrifying as it is a possible future of the earth. The director has managed to give cold feet to the audience with the picturesque horror! Sounds peculiar but it is what the impact of the series does.

Even though some of the portrayals are unscientific the flavours of the series are not off-putting. If you are a science buff the series might have some illogical stances here and there but the cast has managed to keep our attention grabbed throughout the series. The execution of every character is tremendous. Not a single actor had an unjustified portrayal.

The graphics designing team has given no scope to question their abilities. They have pulled up a fantastic illustration of the moon and the other fictional stuff playing an integral role in the show. The screenplay is worth praising if you oversee some of the indefinite theories related to science. So, if you want to soothe your eyes with an interesting storyline then The Silent See for the weekend won’t be a bad idea.

The Silent Sea - Where to watch?

Yay! The show is available for streaming online and you can watch The Silent Sea on Netflix.

The Truth Comes Out - Watch Online 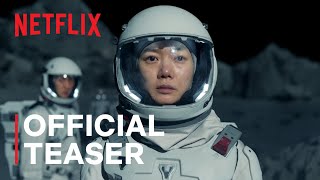