A wacky whodunit set in Mumbai's Sunflower Housing Society. When Raj Kapoor is discovered dead in his residence, the police begin their inquiry by questioning the inhabitants of the Sunflower Society. Many people are being held as prime suspects in the murder investigation. Sonu (Sunil Grover) jumps right into the middle of a murder investigation and ends up as the lead suspect. Around him, the actual assassins, a couple who live in Sunflower, proceed with caution. Additionally, as the tale continues, the people of the society become concerned about the society's good old splendour being lost. When Inspector Digendra (Ranvir Shorey) and Sub-inspector Tambe (Girish Kulkarni) investigate the matter further, they discover something surprising. Who is the murderer? What was their purpose, exactly? You must see the web series to find out the answers to these questions.

Why should you watch Sunflower?

The fact that Sunil Grover starred in this show is the primary reason to watch it. This time, though, it's not in a comedy or reality show, but in a smart, edgy, and crime-thriller drama. The series consists of eight episodes, the first three of which are highly enjoyable until the story slows down until episode six. It will keep you intrigued with its weird narrative from this episode until the last. The writing, premise, and concept of the narrative is intriguing.

The series' central plot centres around our society. How society expects us to act in a certain manner and condemns us if we don't. Sunil Grover did an excellent job in this part. He's portraying an OCD (Obsessive Compulsive Disorder) patient who is obsessed with keeping everything in order. Starting with his dialogue delivery, mannerisms, and emotions, he did an outstanding job portraying the role. But it doesn't stop there; his simple dialogues make you giggle as well.

Apart from that, Mukul Chadda, who plays Professor Ahuja, and Radha Bhatt, who plays Mrs Ahuja, fared well in their respective roles. In addition, Ranvir Shorey and Girish Kulkarni's portrayals of their respective roles were amazing and provided their own unique nuances to their distinct personas. Their expressions and delivery of speech were sometimes enough to get you to chuckle. Besides that, practically every character in the series has a unique feeble side, which each of them has masterfully expressed.

Overall, this web series is a fresh who-dun-it in the dark humour and sly genre, an enjoyable series for those who love the irreverent, the suspense and the weird with a pleasant ting.

Sunflower - Where to watch?

Yay! The show is available for streaming online and you can watch Sunflower on Zee5. 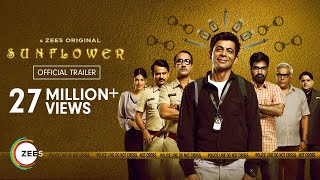