The narrative is placed in South Korea during the 1987 Democracy Movement where Eun Yeong-Ro and Im Soo Ho are students of a well-known university at Seoul. At a social gathering, Yeong-Ro falls in love with Im Soo Ho at the first glimpse. On the other hand, Soo Ho is a German native who exudes a delicate appeal while maintaining a sense of mystery. Soo Ho, one day, dashes into a women’s dormitory drenched in blood. Despite being under intense monitoring, Yeong-Ro hides him and takes care of him. Her dorm room serves as a haven for him from the authorities. However, as the plot unfolds, it becomes clear that Soo Ho isn’t who he seems to be. To discover what occurs next in the narrative and what happens to them? Watch this drama to find out more.

Why should you watch Snowdrop?

The drama is set in 1987 and centres on a forbidden tempestuous love affair between two university students, Jung Hae-In (Soo Ho) and Jisoo Kim (Yeong-Ro). The representations of the lead characters are spot on, and their connection is palpable. The drama's narrative is a roller coaster trip that takes you through a myriad of intense emotions in a single episode yet it's never too depressing to make you feel miserable. Not to mention the fact that Jung Hae-in performing a physically demanding character is one of his greatest performances to date, and he outshines himself with this one. Jisoo, on the other hand, has demonstrated to the audience her acting ability and expertise by presenting her role perfectly. And while Yoo In-Na has never portrayed a villain before, she did dominate the scene with her commanding presence.

Each character in the show has a fascinating backstory that is gradually revealed. A little more than an hour-long episode won't bore you at all, and it will keep you fascinated all the way through, leaving you wanting more. The narrative is brilliantly conceived, and the director does an excellent job of keeping you on the edge of your seat. Also outstanding are the music, supporting characters, and cinematography. The show is a well-balanced blend of melodrama, dark humour, romance, and fiction. In their respective roles, all of the actors perform a terrific job and the story's pacing is likewise excellent; it's smooth and precise.  Overall, if you're searching for a fresh drama with interesting characters and a love theme from the 1980s, this drama is a must-see.

Snowdrop - Where to watch?

Yay! The show is available for streaming online and you can watch Snowdrop on Hotstar. 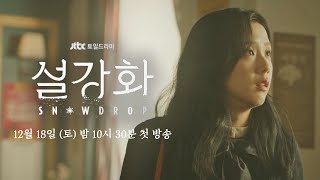