This is a seven-episode series dealing with a quintessential crime drama. The story revolves around a computer expert who wants to save her dad.  Her father is a renowned crime novelist but is currently suffering from Alzheimer’s. He is found on a murder scene with no memory of what transpired. It looks like the reputed crime novelist had committed the murder. The novelist Ganesan is found by his daughter in a muddled state next to a woman’s corpse. The daughter Anuradha (Tamannaah Bhatia) is an ethical hacker and she tries to follow her father’s trail to unfold the mystery. She teams up with her father’s caregiver Chithra and his friend Malar to save him from the cops. So, if not Ganesan who killed the woman? Watch November Story, to get your answer.

Why should you watch November Story?

November story is a whodunit story. It is directed by Indhra Subramaniam who has done a great job in making the series engaging. Like a good novel, he has left hints and pieces of information in every episode. He provides us with many suspects and keeps us hooked on guessing the killer. This series is pure homage to the typical crime genre. The series is set with good momentum and is quite suspenseful.

There are several reasons to watch this series. Firstly, it is written and directed by Indhra Subramaniam. This seven-episode series is packed with crazy twists, misdirections, sudden flashbacks, sneaky characters, and divulgences.

The director keeps feeding us small nuggets of information in each episode. With a narrative that unfolds in front of us also gives us a reason to be engaged with the show. The solid performances by the cast are unmissable. Tamannaah is very convincing and blossoms in this series as a complex character of a woman who is wrestling with a lot of problems.  G.M Kumar as Ganesan is the perfect fit for this puzzle. The cinematography truly brings out the theme of crime drama. If you are a sucker for such stories you should definitely watch “November Story”.

November Story - Where to watch?

Yay! The show is available for streaming online and you can watch November Story on Hotstar. 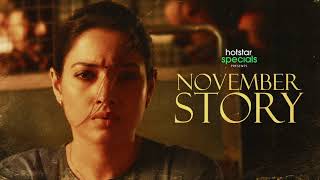 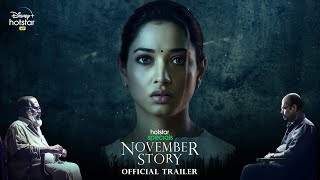