MX player has outdone itself by releasing ‘Matsya Kaand’. It stars Ravii Dubey who plays the character of Matsya Thada who is an excellent con artist. This character executes each ‘kaand’ with intelligence and charm. The character Matsya is an expert in disguise who uses his aptitude to persuade his target. Like other villains, he too is supported by a sidekick named Raju who is a hacker. There is another character named Urvashi. She is a mysterious one who can perform magic using her eyes.

This trio was famous for successfully robbing their targets. Like any other con story, this story too involves a super-cop. ACP Tejraj Singh is the one chasing this conmen trio. He is also famous for catching such criminals. But Matsya is known for dodging such cops very well. However, there is always a curveball. When Masya challenges the ACP to catch him there is some awesome action that takes place.

Why should you watch Matsya Kaand?

The amazing part of this entire series is that Ravii is seen in not only one or two but eleven different avatars throughout all the eleven episodes. The transformations are exquisitely executed by Ravii Dubey a.k.a Matsya Thada. The role of ACP Tejraj Singh is played by none other than Ravi Kishan. He plays the role of the ruthlessly cunning ACP very smoothly. The chase between the cop and Matsya is daunting to look at. Where Matsya is very sneaky and clever as a fox the ACP can totally mirror Matsya’s thought process. This also gives ACP some edge over his prey.

This con-thriller functions on a noir theme. It is totally binge-worthy and will leave you wanting more. The unpredictability of the scenes and the gruesome tension make you hold on to the series. The classic cat and mouse chase and the striking cinematography are worth all the praise.

Matsya Kaand has been shot in various different places. Scenes are from Delhi, Jaipur, Meerut and Sambhar. Ajay Bhuvan, the director, as excellently captured the beauty of these places and modelled them into this noir piece. Further, the series also stars Zoya Afroz (Urvashi), Madhur Mittal (Raju), Rajesh Sharma, Navel Aslam, Piyush Mishra, Srikant Verma and more fabulous actors.  The cast understands the assignment quite well.

Matsya Kaand - Where to watch?

Yay! The show is available for streaming online and you can watch Matsya Kaand on mxplayer. 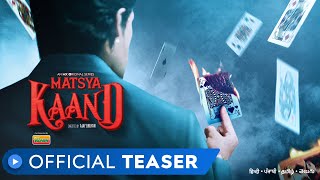 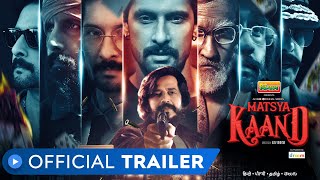