Invincible is an animated series about the life of an average American teenager, Mark Grayson. He is an ordinary boy who is a comic book geek and struggles to get through his high school days. The series shows his early growing pain and revolves around the triumphs and tragedies of his life. Time passes and he comes to know that his father is Omni-Man, a superhero. Mark learns that he too is not an ordinary guy when his superpowers show up. He spends time discovering his powers and wants to follow in the footsteps of his father. From a rookie hero, he is on his path to becoming a seasoned superhero. Will his chase for his dream come true? What lies on his road to fighting evil? Lots of action and drama awaits you so make sure to spend the weekend watching this series.

Why should you watch Invincible?

If you are a superhero fanatic and comic characters entice you then Invincible is surely your piece of cake to savour. The anime looks very ‘90s which you will be vibing with if you belong to the age of comic geeks. The characterisation of Mark Grayson can be very relatable to the regular teenagers of all times. It gives you a sense of feeling that you have a superhero within you no matter what. You just need to give it the space to show.

While the anime is laid back but it is captivating enough to be liked by teenagers to this day. The revelation by mark’s father about him being a superhero and the turn of his life from that point make the series a lot more interesting. When Mark turns 17 he gets to have glimpses of his superpower the struggle he faces to win over them is remarkable. Even if it is a fantasy it has a lot to learn from.

The series is well made, it marks the transitions of Mark’s life to the point. The superpowers and their uses are marvellously displayed. You will not feel like leaving the series in between. The kid mark and the all-grown-up Mark have many humanly attributes to make it more understandable for the audience. The dialogues are well written and have inner meanings to utilise in our own lives.

Invincible - Where to watch?

Yay! The show is available for streaming online and you can watch Invincible on Prime Video.

WHERE I REALLY COME FROM - Watch Online

WE NEED TO TALK - Watch Online 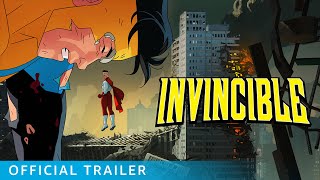