S.P. Amrita Kaur (Zoya Hussain) is dissatisfied with her mundane police job in Ranchi, where she lacks challenges and has inattentive bosses. Gursewak Singh (Pawan Raj Malhotra) is a quiet and devoted father to Amrita and he knows his daughter's predicament. Meanwhile, the Jharkhand government forms a Special Investigation Team to investigate and report on the anti-Sikh riots in Bokaro in 1984 and Amrita is assigned to the squad. She also recognises that it will be tough because of the case's age; she believes that the bulk of individuals harmed by the riots, as well as those who conducted them, may no longer be living. Nonetheless, she accepts it as a challenge and gives it her all. What happened during the 1984 Bokaro riots? Was Amrita's investigation successful? Is she able to solve this age-cold case, or has she failed? To discover more, watch the series.

Why should you watch Grahan?

In two time frames, Bokaro 1984 and Ranchi 2006, the series offers a heartbreaking and hair-raising depiction of India. It demonstrates how brutal it truly brutal and unites these two timeframes, which are 30 years apart, by depicting violent events that occurred after the death of then-PM Indira Gandhi, in 1984. The series gives a vivid representation of how riots are genuinely sparked, and how the poison of animosity spat by one individual for self-interest may drive others and convert them into masses walking down the path of mayhem.

The Bokaro Riots in Jharkhand 1984, which shattered people's livelihoods and ambitions, have been extensively depicted. Furthermore, the series has demonstrated how paltry leaders and politicians incite, deceive, and push people to hatred and bigotry, and how diverse cities, neighbourhoods and villages turn against one another.

Although the non-linear style is nothing new, Grahan continues to keep you captivated while avoiding any ambiguity. When it comes to acting, both Wamiqa and Anshuman come out on top, as their old-school passion captures your heart. In the part of the Investigating Officer, Zoya Hussain is natural in her approach of wearing nearly little make-up and avoids being theatrical while expressing the agony of a betrayed daughter. She is well-supported by Sahidur Rahman, who portrays DSP Vikas Mandal, and who, with his elegance and demeanour, does justice to his part.

Aside from that, the cinematography is pretty great, and the transitions between the two periods, 1984 and 2006, are seamless. Overall, this is a very interesting series that will keep you interested for virtually the whole run. Even if this isn't your usual genre, you should see it.

Grahan - Where to watch?

Yay! The show is available for streaming online and you can watch Grahan on Hotstar. 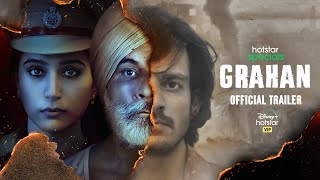