Dhindhora is a power-packed comic series currently streaming on YouTube. This series is quite intriguing since it depicts the regular lives of middle-class families with their typical quirks. The title Dhindora, which means 'beating the drums' perfectly captures the show's central theme. Bhuvan, is a college student aiming to be a singer. The plot revolves around a middle-class family, Babloo, Janki, and Bhuvan, and their everyday lives, goals, and ambitions. When Babloo wins the lottery, everything changes in numerous ways. With a whole lot of twists and turns to know how their lives develop and how they deal with all the upcoming changes, watch Dhindora!

Why should you watch Dhindora?

The title Dhindora, which means 'beating the drums' perfectly captures the show's central theme, which revolves around Bhuvan, a college student aiming to be a singer. His mother Janki, and his father Babloo, who is anticipating a promotion and pay increase at his employment. The plot turns gears when Babloo, who receives a promotion but also wins the lottery and influences the lives of everyone in their world.

The subtle observation of life and relationships in metro centres hides a wealth of emotion. Dhindora discusses the dissolution of the nuclear family, with individuals having nothing in common. Bhuvan struggles to sympathise and connect with his parents, but during the course of the episode, he grows to understand his family's eccentricities.

Those familiar with Bhuvan Bam's BB Ki Vines would recognise the several characters he portrays, including Bhuvan, his father Babloo, mother Janki, uncle Titu, and his buddies Sameer Fuddi, Bhanchoddas and even the college teacher. For his fans, notably those who have grown close to the characters over the years, seeing them all together in a legitimate series is nothing short of a fantastic experience. Bhuvan Bam possesses considerable acting skills, certainly enough to pique the interest of the viewers. He appears in each frame as a distinct character and continues to do everything with the same fluidity and confidence, never allowing one to obstruct or overwhelm the other.

Apart from this, the show takes on a meta documentary feel when Anup Soni appears in his Crime Patrol persona. He makes the most entertaining special appearances, and the serious expression on his face when delivering humour will be appreciated for a long time.

Besides, the production elements are reasonable, and the capital is used effectively in the story. The soundtrack is an intriguing combination. The title song, Dhindora, and Bhuvan's inventions like Saazish, sung by Rekha Bhardwaj and Ban Gayi Zindagi, lend value to the web series.

Dhindora - Where to watch?

Yay! The show is available for streaming online and you can watch Dhindora on YouTube. 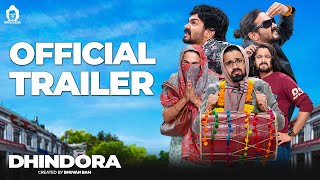