Campus Diaries is a web series that depicts college life in all its facets. This series follows six friends as they fight to live their lives on their terms as students at a fictional institution called Excel. The narrative revolves around their individual and collective journeys as they face various obstacles, delights, and emotions. So, go watch the series to learn more.

Why should you watch Campus Diaries?

Campus Diaries isn't your typical university drama, but it does go beyond the amount of friendship, and ordinary cavort narratives that most early age or similar shows don't depict. It addresses important themes which are rarely discussed such as bullying, ragging, one-sided love tales, unhealthy relationships, and chronic drug usage, all of which shape your identity and prepare you to confront the adult world.

This web series covers a wide range of sentiments, and you may find yourself identifying yourself with the characters. It's a programme with a lot of depth and charm in its presentation. The tale revolves around the six main characters, all of them are Excel University students and friends. Another component of this series is its storytelling, which is its best feature. The writers have included precise details in everything from college cafeteria gossip to different-sided love equations.

The references made during the show appear to be amusing. There are multiple allusions to Breaking Bad, GOT, and other famous shows in the narrative. The abuses have also been given a feeling of heft by such allusions, which most of the time appear natural.

Harsh, who plays Sudheer, deserves a particular mention for his amazing performance. People know Harsh as a prominent YouTuber renowned for his comedic shenanigans, however, in this series, he defined himself as a great actor, nailing the emotional parts. He grabs your interest right from the start. Ritvik Sahore, who plays Abhilash, does an excellent job portraying his role as a college student.

In the portrayal of Sushmita, Saloni Khanna dazzles as a colourful college student. In terms of dazzling, Srishti Rindani, who plays Sanya, a small-town geek, did a fantastic job. Sanya's character experiences several ups and downs, which Srishti controls like a professional with her acting abilities. In addition, Saloni Gaur portrays Priyanka, a conscientious revolutionary, admirably, and Abhinav Sharma, who portrays Raghav Gupta, deserves special recognition. He's picked up on so much pertinent knowledge about a drug addict hippie that you'll question if he's genuinely intoxicated. Apart from that, everyone else has done such a decent job of portraying their personalities that you feel like you know them personally. Overall, Campus Diaries is full of witty references and clever punchlines that will make you laugh out loud. The main drawback is the show's length, but if you don't mind that and enjoy the genre, it's worth a go.

Campus Diaries - Where to watch?

Yay! The show is available for streaming online and you can watch Campus Diaries on mxplayer. 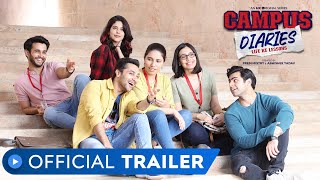