Amanda (Sandra Oh) and her homeschooled teenage daughter, Chris (Fivel Stewart), are the central characters of Umma. They both enjoy a calm life on an American farm. But soon the calm existence of the mother and daughter is disturbed by the unexpected arrival of Amanda's uncle (Tom Yi) from Korea. He brings a peculiar present, a huge box holding Amanda’s recently dead mother's ashes along with her belongings. Amanda, who has been alienated from her "umma" (as Amanda called her mother played by MeeWha Alana Lee) for a long time, is adamant about avoiding being a part of it and for good reasons. Horrible things start happening as soon as her uncle departs. Amanda's 'umma' makes spooky appearances and hectors her daughter, indicating that the mother and daughter have some unresolved emotional business. You'll have to see this movie to find out how the story unravels.

Why should you watch Umma?

The plot revolves mostly around immigrant families' generational trauma. The film itself isn't particularly frightening, but the concepts it explores are, as it deals with remorse and generational distress.

In many respects, 'Umma' is an intriguing and ambitious movie that is eager to tackle a wide range of serious themes. These themes are portrayed in a number of well-conceived situations, which are bolstered by great performances from the usually trustworthy Sandra Oh, Odeya Rush, and Fivel Stewart.

Rush has a few piercing sequences when Mulroney's niece from the city approaches the lonely Chris and opens her eyes to the potential that Amanda may not be completely candid about her (Amanda's) "allergy," which is that she reportedly becomes ill if she comes into contact with electricity. Moreover, Stewart's compassionate portrayal as the befuddled daughter who adores her mother but longs to forge her own path adds much-needed heart to the narrative. Oh, with her marvel of a performance made sure to woo the audience. The transitional events and the sudden shifts in the vibe of her character have been brilliantly portrayed by her. She managed to play a mother with a complex bond with her daughter in a realistic manner.

Writer-director Shin used genre conventions to investigate the complexity of controlling mother-daughter relationships. There are a few startling scenes, such as Amanda's umma presumably attempting to drag her daughter into her grave, but they never gel into a cohesive visual aesthetic. The early shocks in the film are really powerful, particularly one that awakens Amanda amid a lightning storm. And the portrayals of Korean life and traditions are genuine and honest. Despite the flaws, the film has a lot to offer and is hence worth watching. It has enough interesting components that will entice you and keep you adhered to the screen till the end.

Umma - Where to watch? 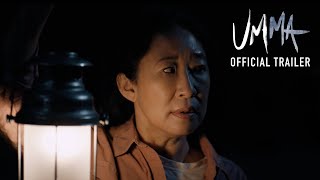