The movie's title Trikona represents three different people. Trivikrama (Rajiv) is one of them who always looks down upon people around him. The second one represents a 45 years old family man Kondandarama (Achyuth Kumar) who likes to keep his wife (Sudharani) under control. And the third one is Nataraja (Suresh Heblikar) who is a 65 years old person. All these three male characters are heading to a hotel for individual reasons. They encounter on the same road from Bangaluru to Mangaluru. So, the test of Patience, Ego, and Strength begins from here. The younger of the three Trivikrama is an epitome of strength. The married couple played by Lakshmi and Suresh is an embodiment of Patience while Kondandarama represents ego in the film. The tracks in the movie begin to deal with this flick dissecting the emotions of humans. Some interesting twists and turns take place. How do they manage this situation? Could all of them be able to overcome it? Who wins? Well, the more the questions, the more interesting are the answers. You must watch Trikona for it!

Why should you watch Trikona?

Cinema is surely a wonderful medium to make your imagination come alive. The plot of the movie is very well executed by the director Chandrakanth. The idea behind the script of three emotions is quite interesting. Not everyone has the courage to make such experiments as this film. The content is effective and the treatment is powerful. Although, it all goes through a long way which could be crisper and shorter. But the impactful storyline compensates for these tiny faults in the movie.

The characters of the movie do justice to their roles. The embodiment of these three emotions is done perfectly by each one of them. It reflects very impactfully in all the characters especially,  when you see them in trouble, you start feeling it too. Achyuth has done a brilliant job with his defined emotion. The dialogues of Sudharani lead her to grace. All characters with their screen presence succeed to connect with the audience.

The background score and the lyrics of Trikona draw attention while some scenes at the start of the film look forced. Yet, the cinematographer Srinivas Vinnakota has done a decent job. Some sequences and the subplot in the movie can make you chuckle but these all seem out of the main plot. In short, Trikona is a travel story that ties up three different lives in an interesting way. The movie works to hook its audience with a nicely constructed and experimental story which is quite enough to keep the viewers engaged.

Trikona - Where to watch?

Yay! The movie is available for streaming online and you can watch Trikona movie on Prime Video. It is not available to buy/ rent online on any platforms right now. 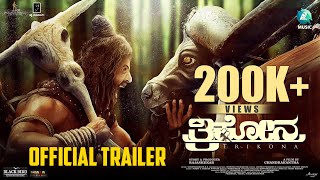