In this story, Toolsidas (Rajiv Kappor) who is a world-class snooker player loses in a critical tournament against his arch-rival. Throughout his life, Toolsidas played “only for his son”, Midi (Varun Buddhadev). And this loss devastated both of them. Midi then decides to master the game himself in order to restore his father’s glory. However, he finds it difficult to get a mentor. And after a lot of struggle, he meets a former snooker champion, Mohammad Salam aka Sanjay Dutt. However, he is a tough person who doesn’t entertain anyone. So, will this man mentor Midi to restore his father’s lost glory? Watch Toolsidas Junior to know more.

Why should you watch Toolsidas Junior?

Toolsidas Junior is a movie that is inspired by true events. Writer-director Mridul offers Toolsidas Junior, a story depicting the bond between the father & son and their collective goals. In most parts of this film, the audience will be completely hooked on Midi’s life journey to get accomplished as Toolsidas Junior. This sports drama is different from any other sports-oriented storyline. The primary reason is unlike other sports dramas, Mridul’s Toolsidas Junior has no pushy parents deciding what their child should do. Rather, in this movie, we can see the main character's own desire to fulfil his father’s wishes.

The story of this film is rooted in Calcutta (1994) where we can see Toolsidas, an ace snooker champion. He proudly declares that he “ plays for his only son”. From this, we can understand that the father and son shared a great bond. As the story progresses, we come to know that Toolsidas wants to defeat Jimmy Tandon aka Dilip Tahhil, a five-time snooker champion. He also tells his son, Midi, that he will bring the trophy home. Unfortunately, he ends up losing the tournament. This devastates both father and son and that’s when he decides to fulfil his father’s dream. In this journey, he struggles to find a mentor. In addition, he can’t even play in the same club as his father due to the ‘under-16’ policy. However, Midi’s dedication takes him to the Wellington Club. Here he meets Mohammad Salam former champion.

Mridul and Ashutosh Gowarikar’s screenplay is devoid of all the commercial elements including action scenes, upbeat songs, and massy dialogues. However, when you watch the film you will understand that even without that, the movie retains a charm. The 1st half is fast-paced, as everything happens swiftly in Toolsidas' life, but the speed decreases with the story progresses. Arijit Singh's - 'Udd Chala Badal Naya' offers a calming effect long after the film is over.

From the first scene, the characters appear to be genuine people with immediately recognised traits. The lead character, Midi, played by Varun Buddhadev was honest and appealing. He seamlessly evoked all the emotions that he as a character was going through in the movie.

Sanjay Dutt can be seen in an intriguing performance as the coach. Also, the late Rajiv Kapoor's final on-screen depiction as Toolsidas seems promising. Despite his brief appearance, he plays a vital role in the movie. Chinmay Chandraunshuh’s appearance as Midi's elder brother Goti, is frustratingly intriguing. And throughout the movie, Dilip Tahhil continues with a consistent winning look.

Toolsidas Junior - Where to watch?

Yay! The movie is available for streaming online and you can watch Toolsidas Junior movie on Netflix. It is not available to buy/ rent online on any platforms right now. 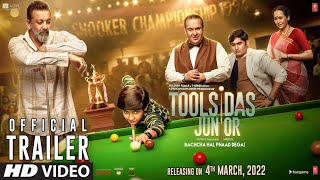