Thor's (Chris Hemsworth) retirement is disrupted by Gorr the God Butcher (Christian Bale), a cosmic assassin who desires the annihilation of the gods. To battle the menace, Thor asks for the assistance of Korg aka Taika Waititi, King Valkyrie aka Tessa Thompson, and his ex-girlfriend Jane Foster aka Natalie Portman, who, much to Thor's amazement, wields Thor’s mystical hammer. Together, they take off on a perilous cosmic journey to solve the riddle of God Butcher's revenge and prevent him before it becomes too late. To know how the plot unravels, visit your nearest theatres on the 8th of July, 2022.

Why should you watch Thor: Love and Thunder?

If you are an ardent fan of the Avengers series then the latest one to boggle your mind is Thor: Love and Thunder. After the antagonist Loki’s enthralling series, the Marvel studios have come up with a superhero movie again. The trailer showcases Korg, recounting the travels made by Thor so far. We also see Thor reconcile with his ex-girlfriend aka Jane Foster. Besides, Christian Bale is here as the God Butcher, wicked Gorr for the very first time on screen. Gorr appears much like Lord Voldemort from Harry Potter’s storyline, comprising a sinister tone and the skin white as a ghost. The trailer also previews comedic interactions between Thor and Jane, and Bale's passionate acting, all while the hit Sweet Child O' Mine by Guns N' Roses plays in the background. So hold your breath and wait for the movie to hit theatres on July 8, 2022.

Thor: Love and Thunder - Where to watch? 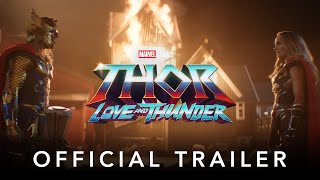