The story surrounds Krishna Pandit (Darshan Kumar), who is a Jawaharlal Nehru University student. He was told by his grandfather (Anupam Kher) that his parents were killed in an accident. However, the real story behind is quite nerve-wracking. In the movie, Krishna is caught between two opposing narratives of the 1990s Kashmir Pandit exodus. One side of the narrative was represented by a JNU professor (Pallavi Joshi) who was getting a lot of support for her Kashmir cause (Azadi), throughout the campus. On the other hand, there was Nath, who for 30 years, has been struggling to get justice for the exodus. The professor claimed this exodus to be a sham. After Nath’s death, Krishna goes to Kashmir to fulfil his last wishes. There, he meets Nath’s four friends and later he comes to know about the true story behind his parent’s death. And thus, The Kashmir Files becomes a journey of unravelling the truth for Krishna Pandit.

Why should you watch The Kashmir Files?

This movie is one-of-a-kind that required extensive research and hard-hitting testimonials. Makers Pallavi Joshi and Vivek Agnihotri took four years to make this film. As mentioned earlier, The Kashmir Files is a constant battle of two narratives. Director Vivek Agnihotri has propelled an alternative view concerning the Kashmir issue with the intent to incite. In this movie, you can see the pain of Kashmiri pandits, in the form of testimonies by victims who suffered for generations (because of the insurgency of the State). It loudly speaks of the tragic exodus that has been ‘deliberately’ kept away from the rest of India. As mentioned above, in the movie, you can see Darshan Kumar playing the character Krishna Pandit, who studies at JNU. And he is tutored by Radhika Memon, who believes that the secessionist movement is just like India’s freedom movement. But then, he hears a completely different narrative from his grandfather and that led him to be confused.

Later after the demise of Krishna’s grandfather, Pushkar Nath (Anupam Kher), things start getting darker. The villain of this story is Bitta, who was like a real-life combination of Ghulam Mohammad Dar alias, Yasin Malik, and Bitta Karate. The movie is emotionally striking and few scenes are quite eye-openers. You will be showcased bloodshed, torture, and terror (with intense brutality). Accurately justifying, the not so known dark and brooding shades of Kashmir Valley, ironic to the beautiful landscape it has to offer.

Coming to the cast of the film, Anupam Kher, being the conscience keeper, was at his rhetorical best. Also, Darshan Kumar’s role as Krishna Pandit was splendid. Pradesh Belawadi, Puneet Issar, Mithun Chakroborty, and Atul Srivastava, were very convincing as Pushkar Nath’s friends. Nevertheless, we have this much to offer. You can go and watch this movie to discover the rest by yourself and decide.

The Kashmir Files - Where to Watch?

Yay! The movie is available for streaming online and you can watch The Kashmir Files movie on Zee5. It is not available to buy/ rent online on any platforms right now. 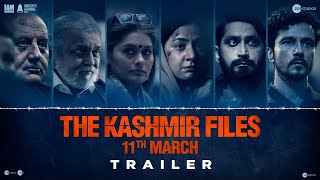