The Cellar has been adapted from a short film called ‘The Ten Step’ by Muldowney in 2004. It is different from the other adaptations and does not feel like it has been stretched out unnecessarily. The Woods family takes up a once in a lifetime opportunity and buy their dream house. It is a vast, luxurious, and completely furnished Irish manor in the heart of this city’s suburbs. Like any other classic horror movie, the place is huge and almost creepy. Keira Woods and Brian Woods are the parents who have two children Ellie and Steven. The children normally choose to roam around the vast corridors and vacant new manor. But there is something that catches their attention, a wind-up gramophone. Certainly, there are more secrets hidden in plain sight. Still, who can tell what lies beneath the kids' suspicion? There is something wrong with the house and with the cellar. Maybe there are dark, frightening mysteries creeping in the cellar? Watch The Cellar to unravel these mysteries.

Why should you watch The Cellar?

This movie is a quintessential blend of classic horror and mint ideas. This film has already been acquired by Shudder and RLJE Films. The Woods family as in Keira and Brian Woods move to this house with their children in Ireland. And according to every horror story, this big beautiful house also has some creepy elements.

The movie starts like any other typical horror story. Maybe it even is. It sounds like a standard haunted house story, and in many ways, it is. A mysterious force moves in the dark, ominous noises are heard, and legends of twisted rituals are told. The director Brendan Muldowney does stellar work to set the tone of the film. When you watch this film you will constantly feel the eerie nuance that will keep you on the edge of your seats. You will constantly expect a jumpscare. The horror genre is enough reason to watch this movie.

This movie is Elisha Cuthbert’s comeback film. It is quite refreshing to see her on screens after 15 years. She was last seen in Captivity 2007.

The Cellar - Where to watch? 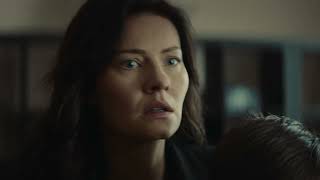