S/O Satyamurthy (read as Son of Satyamurthy) is a Telugu family drama written and directed by Trivikram Srinivas and produced by S. Radha Krishna under the banner Haarika & Haasine Creations. It features an ensemble cast of Allu Arjun, Upendra, Samantha Ruth Prabhu, Sneha, Adah Sharma, Nithya Menen and Rajendra Prasad. Devi Sri Prasad is composing the music for the film. The film was launched officially on 10 April 2014 at Ramanaidu Studios in Hyderabad. The principal photography commenced on 22 September 2014 at Hyderabad. The film released worldwide on 9 April 2015.

S/o Satyamurthy - Where to watch?

Yay! The movie is available for streaming online and you can watch S/o Satyamurthy movie on Hotstar, Viu, SunNxt, mxplayer. It is not available to buy/ rent online on any platforms right now. 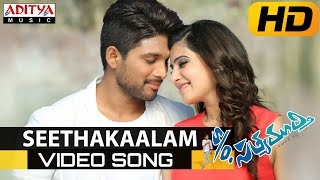