This first feature film from Indian playwright Anand Gandhi, tells three stories about persons forced to think about the ethics and moral issues raised by medical advances: a visually impaired Egyptian photographer, who after a cornea transplant has trouble adjusting to her newfound sense of sight; a devout Indian monk fighting against animal testing, who has to confront his beliefs when he is diagnosed with liver cirrhosis; and an Indian stockbroker, who after having a kidney transplant learns about the illegal trade in stolen organs and decides to help a poor victim of such theft - even though it means travelling all the way from India to Sweden. The film was first shown at the 2012 Toronto International Film Festival, where it received great critical acclaim and was touted as "the hidden gem of the year". It was released in India in July 2013, and was awarded Best Feature Film of 2013 at the Indian National Film Awards in 2014.

Ship of Theseus - Where to watch? 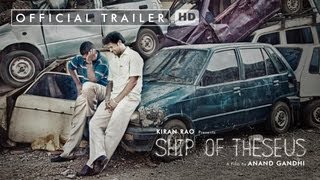