It is a story about a 58-year-old West Delhi widower B.G. Sharma who has been laid off from a company where he served his entire life. B.G Sharma is a middle-class man with two kids- one is a college student and the other works at a reputed private firm. Since he spent most of his life in an office now he’s struggling with the beast called retirement. He’s always finding new ways to do something productive but ends up getting in his son’s way. For his sons, he’s always a troublemaker until he gets into the kitchen. After voluntary retirement, B.G. Sharma’s best friend became his kitchen. He spent most of his time there. He is a world-class chef, who’s not yet discovered. And the world is unaware of his culinary skills.

Why should you watch Sharmaji Namkeen?

Sharmaji Namkeen, directed by Hitesh Bhatia, is one of those films in the Indian Cinema that portrays routine in a very simple and sweet way. We know that sometimes routine can be boring. But what happens when you don’t have a routine? In Sharmaji Namkeen you can see two veteran actors, Rishi Kapoor and Paresh Rawal playing the same character as B.G. Sharma aka Sharmaji. Sharmaji is a 58-year-old widower who worked in a company from 9 to 5. However, the company laid him off early, and asked him to “rest at home”. In all these years, he worked sincerely and earned a fair reputation among everyone. But poor Sharmaji didn’t know what he was supposed to do in his retirement days. So, whenever he got the opportunity (which was mostly always) he would cook something for himself and his family. Little did he know that his love for food and cooking would lead him to a lady's kitty party gang. This ladies' kitty gang was led by Veena (Juhi Chawla). And during his cooking sessions at all their parties, he became a sole member of their gang.

So, we can say that this movie has a light-hearted story that breaks all gender stereotypes and ageism.

In many films about elderly people, we have encountered the idea of ungrateful children and their troubled old parents. But Hitesh Bhatia’s Sharamji Namkeen eliminates the Bhagban vibe and provides an innovative take on self-love, single fatherhood, and loneliness. Every character in this movie has an opinion, But, we cannot call anyone a villain in this film. Sometimes the only thing standing in your way is the weight of your restrictions. Bhatia's lead character does not dwell in self-pity as someone his age should in our films. The main character is kind yet doesn't give in when pressed. He is a devoted parent who does not sacrifice his self-esteem. The characters are as genuine as they can be, and their plight is understandable.

The main highlight of the movie is of course Rishi Kapoor and Paresh Rawal playing the same character, which has never happened in the Indian Cinema before. Rishi Kapoor’s love for food and family brought the natural essence of this film. Also, Paresh Rawal seamlessly filled in for the portions that the former actor was unable to do because of his deteriorating health.

Overall, Sharmaji Namkeen is a feel-good movie that can give you the anecdote of self-love even in your tiring days. And just like the protagonist’s “Namkeen” personality, the movie will also give a platter of emotions.

Sharmaji Namkeen - Where to Watch?

Yay! The movie is available for streaming online and you can watch Sharmaji Namkeen movie on Prime Video. It is not available to buy/ rent online on any platforms right now. 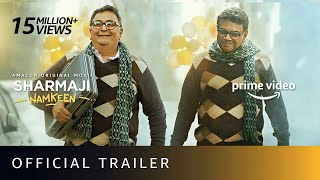