In this story, there is a boy named Varun played by Harsh Kanumilli who is a rich and carefree guy. But, he is very childish at heart. He had a terrible breakup and he impulsively decides to get married to a girl who is more gorgeous than her ex-girlfriend. His marriage then gets fixed with Aliya played by Sneha Milidindi. As a ritual, Aliya’s elder sister, Amulya played by Simran Choudhary takes care of all the wedding customs and traditions. And in this course, Varun starts developing feelings for Amulya and wants to call off the wedding. Did Varun seriously call off the wedding? Did he tell Amulya about his feelings? To know all of that, watch Sehari.

Why should you watch Sehari?

Sehari, directed by Gnanasagar Dwarka is a tale of a confused millennial who is in his 20s, trying to figure out what love is. As the lead character, we have Varun played by Harsh Kanumilli. He is playing the role of a 24-year-old  who is immature and gets dumped by her girlfriend after college. And we know what happens when someone goes through a break-up phase. The actor established all such nuances pretty well and the director added some humour around the matter, to lighten the mood. For those who love comedy, these comic scenes will be perfect for you. The movie highlighted Varun’s college life in flashback scenes. From there, we can get an idea of his toxic nature. And because he was like that he could never figure out what love is like. Varun, just to teach his girlfriend a lesson, decided to get married. When his parents find a girl (Aliya) for him, he falls in love with her sister (Amulya) instead.

So, it is a kind of movie whose plot we are all quite aware of. Thus, we can say that Gnanasagar wanted to play it safe by not delving into any other ideas. There's even a rap fight, which is an entertaining and welcoming respite amid a few mediocre sequences. Both Pranav Chaganty and Abhinav Gomatham’s appearance was quite strong.

One more evident flaw in Sehari is how Amulya falls in love with Varun after pointing out his “immature” habits. This theme has not been clarified by the creators or by the characters. In addition, the second half of the movie is built with sloppy writing which adds to the drawbacks.

However, when it comes to music, Sehari gives a great presentation. Songs presented by Prashanth R Vihari were undoubtedly melodious and would remain in our minds for a long time. Harsh should have gone with a better storyline as a first hero because he's remarkable, but he kept it safe. Simran is beautiful and emotes effectively. Abhinav needs to bring more new humour elements now, as he’s deserving.

As a movie of this decade, Sehari is not a bad rom-com. It's just not innovative. If the romance-comedy genre is your thing, then you would love Sehari.

Sehari - Where to watch? 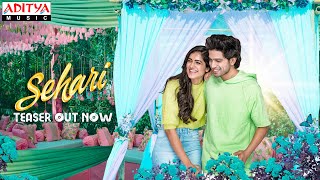 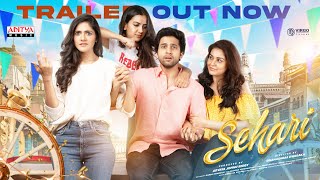