After the death of his first wife, wealthy Raja Aditya Pratap Singh, re-marries another woman, simply known as Chhoti Rani, who subsequently becomes mentally unstable. His father's former mistress, Badi Rani, controls the wealth, while he himself has a mistress. Unable to procure contracts through Mantri Prabhu Tiwari, he decides to stand for elections, while his rival, Ghenda Singh, recruits an assassin, Babalu, who is also the nephew of Sunder, Chhoti Rani's chauffeur, to kill Aditya. After Sunder is unable to drive due to an injury, he recommends Babalu, and Aditya hires him. Babalu settles down in his new job, attempts to get accepted by everyone, including Chhoti Rani, who he finds attractive. He soon finds out that she, too, has feelings for him, and then starts making plans of not only carrying out his assigned task but also becoming the next Saheb. 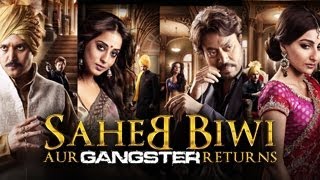