Synopsis
Captain Vikrant Khanna (Ajay Devgn) works for Skyline Airlines as a pilot. He arrives in Dubai on August 16, 2015, and is scheduled to fly to Cochin the next day. Tanya is his co-pilot (Rakul Preet Singh). Both parties are advised prior to the trip that Cochin is experiencing severe rain. The plane lifts off, and Vikrant and Tanya have a tough time landing. Vikrant attempts but fails to land. After that, he travels to Trivandrum. Trivandrum's weather has also deteriorated by that time. It's too late by the time the Skyline 777 reaches Trivandrum and is informed of the situation by the local Air Traffic Control Team. They can't go anywhere else since they're out of gas. The pilots had no choice except to land at Trivandrum Airport. They are advised to land on Runway 16 by Air Traffic Control. Vikrant, on the other hand, insists on landing on Runway 34, which the Air Traffic Control crew believes is a dangerous choice. Despite this, Vikrant successfully lands on Runway 34. The AAIB now wants to see if any regulations were breached during the landing. AAIB's Narayan Vedant (Amitabh Bachchan) takes a particular interest in Vikrant and Tanya and begins to drill them. The rest of the movie is built on what occurs next.

Why Should You Watch Runway 34?
This film is based on actual events that occurred in 2015 when an aircraft from Doha to Kochi narrowly avoided disaster after experiencing difficulties heading to the airport due to bad weather and limited visibility. There are, nevertheless, striking parallels to Hollywood movies like Sully (2016) and Flight (2012). Runway 34, on the other contrary, is a compelling story that is bound to give you an amazing cinematic experience while watching.

In cinema, the Amitabh Bachchan-Ajay Devgn duo is formidable. They were last seen together 24 years ago in the film Major Saab, directed by Mr. Bachchan's pal Tinnu Anand. In this suspenseful aerial thriller, there are no distractions. There are no unwanted songs or storyline interludes in this film. It's a straightforward film that serves as a relaxing alternative to the current glut of over-the-top blockbuster shenanigans.

Yay! The movie is available for streaming online and you can watch Runway 34 movie on Prime Video. It is not available to buy online on any platforms right now. You can also rent the movie Runway 34 on Prime Video starting from Rs 199. 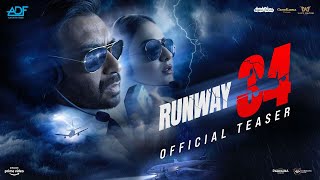 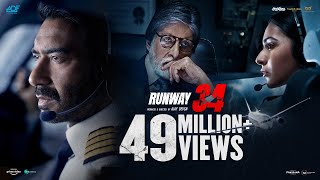