Chotushkone (Bengali: চতুষ্কোণ; English: Quadrangle) is an Indian Bengali thriller film directed by Srijit Mukherji. "Four directors get together and plan to make a film, consisting of four short stories. They have an appointment with the producer on the outskirts of the city. While they are together, each comes up with a story which is unique in its own way, but connected to the other stories by a common theme - death. They spend a night in a nearby bungalow when their car breaks down. It is here that each of them revisits their past and are held at gunpoint by their 'nemesis'."

Quadrangle - Where to watch?

Yay! The movie is available for streaming online and you can watch Quadrangle movie on Zee5, hoichoi, Prime Video. It is not available to buy/ rent online on any platforms right now. 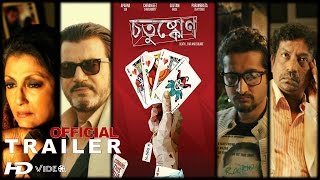