Pathrose, played by James Eliya, lives with his wife and four children. He works for a gas company. Tony, Pathrose's second son, played by Dinoy Paulose, is the main character who lives a happy but lazy life. Sharaf U Deen portrays Sony, Pathrose's eldest son and a travelling artist. Meanwhile, Bonnie, played by Nasleen G. Gafoor, is a burglar. Bonnie is Pathrose’s youngest son. These brothers have a sister named Neenu. An interesting turn of events begins when their grandmother moves in with them. What happens? Watch Pathrosinte Padappukal to find out!

Written and directed by Afzal Abdul Lateef, Pathrosinte Padappukal is a Malayalam family movie that depicts humour, emotions, and friendships.  In this film, we have Tony Pathrose as the main character who is going through heartbreaks, which are not unknown to his friends. In addition to his heartbreaks, he is also battling his low self-esteem. The movie features a married man, Pathrose who works in a gas agency and has a wife and four children. The story starts developing when Pathrose’s mother comes to live with them. All of his adult sons are dependent on him and they make fun of those who have jobs. Sony, the eldest son of this family, wishes to travel the world and also considers Grace Antony as his life partner. While the youngest son, Bony, thinks of himself as a ‘don’. The three brothers have a 12th standard sister, Neenu also. And coming to the main character Tony, is a lazy lad who does no work (which is like all his other brothers). However, he does try to solve a mess that his two brothers have created. And while working on it, he realises to do something in life.

In the movie, we see Tony as the most neglected child. And he is always compared with his brothers (as the other family members don’t know the facts of the matter). Tony is a lonely guy and he’s in a lot of pain due to this. With his grandmother’s arrival, he had to allow his room to her. And that takes us to the next part, where we can see his attempts to get a job. So, the movie has a note of awakening.

Coming to performances, Dinoy Paulose playing the lead character was brilliant. Sharaf U Deen playing Sony and Nasleen G. Gafoor playing Bony also did a remarkable job. The characters of Pathrose and his wife played by James Eliya and Shiny Sara were outstanding. Additionally, the grandmother’s character in the movie was also interesting.

The humour element in the movie is tight and flows organically throughout. Also, the characters involved in the process were brilliant. The story of Pathrosinte Padappukal is told without flashbacks. And every character had its own identity. The movie also had the warmth of good neighbours.

Overall, Pathrosinte Padappukal is a cute family drama. And you can relate to the attributes of the characters in the movie.

Yay! The movie is available for streaming online and you can watch Pathrosinte Padappukal movie on Zee5. It is not available to buy/ rent online on any platforms right now. 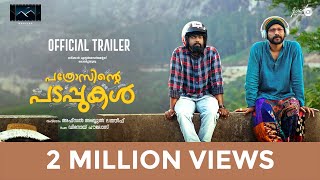