Operation Fortune: Ruse de Guerre is a movie packed with action to keep you entertained in a way you want. The plot of the movie is about a spy and special agent Orson Fortune (Jason Statham) who has to lead an undercover team of five. Nathan Jasmine, who is a government official, gives him a task to find Greg Simmonds, an arms dealer. Orson must stop this arms deal worth millions of dollars as it can impact the entire planet negatively. In order to prevent the man behind this trading, Fortune, with his team of qualified people, makes a solid plan to cope with the situation. Hollywood’s biggest movie star (Josh Hartnett) is going to be used as bait. The 5 spies have to try their best to prevent the arsenal from falling into the wrong hands. They strategize, plan, and perform to make every possible effort for being successful in what they want. What happens next? The mystery and adventure add more flavor to the main story that you are going to watch in the movie.

What should you expect from Operation Fortune: Ruse de Guerre?

Like Guy Ritchie’s other works, Operation Fortune is also a combination of a bold and darkly funny concept. His all-new spy action-comedy is an addition to the series in which the spies are employing their own unique ways to save everyone. The other commendable works of Ritchie include Stocks, Locks, and lately The Gentleman. All these pieces are part of Ritchie’s filmmaking legacy. So, from this film also you can expect lots of head cracking and joint cracking scenes.

Jason Statham does his best as we can see in the trailer. The other characters are supportive and helpful for moving forward with the main plot of the film. The overall execution of the movie is eye-catching for the viewers who watched the trailer. It will be entertaining to see how a group of spies are pushing their boundaries to save the planet.

The background score fits perfectly with the picture. In addition, the dialogues are witty yet snappy with a continuous tone of humor. Not to forget, the screen presence of other important personas like Bugzy Malone, Aubrey Plaza, and Cary Elwes is commendable.

Overall, the movie had some highly entertaining factors. And if action movies are your thing you should definitely give Operation Fortune: Ruse de Guerre a watch. 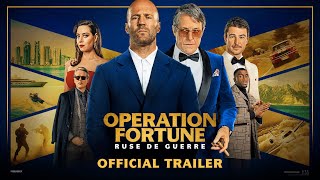