Georgy (Roshan Mathew), is an Uber driver who dreams of a better future in Dubai while  Riya (Anna Ben) is a well-known journalist who is recognised for her distinctive articles. Georgy and Riya have been friends for years and are currently dating. They were driving about at night on Christmas Eve, admiring the city's illuminations and Riya was behind the wheel. However, when the pair gets into a fight with Inspector Benny Moopen (Indrajith Sukumaran), things go haywire.

Furthermore, when her car collides with a person who lunges in front of it, things quickly deteriorate. Although the pair rushes the man to the hospital, she is again at the hands of the Inspector. Prior to the collision, the man had already been stabbed. The couple, on the other hand, was arrested and charged with murder.

Meanwhile, the NIA is looking for and interrogating a major politician (Siddique) about gold smuggling. The remaining of the movie is around how the two storylines are linked and who is the unfortunate victim who ties them all together. As a result, you must see this film to find out how the tale unfolds.

Why should you watch Night Drive?

This time, director Vysakh, who is known for his massive flicks like Pokkiriraja and Pulimurugan, delivers us something a little more restrained movie. This is a thriller with well-timed action sequences. Abhilash Pillai, a newbie, has a crisp, neat way of writing that adds thrills and suspense to the tale. Vysakh, on the other hand, is a high-octane suspense thriller with a political undertone.

Through the eye of cinematographer Shaji Kumar, the city of Kochi looks to glitter. He's on the verge of making you appreciate the city in a whole fresh perspective. The visuals are additionally enhanced by Ranjin Raj's background soundtrack. It should be mentioned that while the first half of the film proceeds at a respectable pace, the second half meanders on with an eyebrow-raiser included just to heighten the dramatic tension as the film nears its conclusion.

The movie begins with a beautiful introduction to all of the characters, with the first 30 minutes focusing mostly on Georgy's and Riya's connection, after which the story progresses. Roshan Mathew's transformation from a kind young fellow to something like an action hero is incredible. Anna Ben and Siddique perform with the grace that is practically expected of them in their roles. Indrajith, who is noted for imbuing every character he portrays with an aura, performed an outstanding job as the police. Besides, the rest of the cast performed admirably in supporting roles.

Overall, the ordinary delivery man's story is rarely shared in real life, giving delivery men far more complex than they look. It transfers them to another world. They have the same right to dignity and respect as we do. This is what the movie reveals, regardless of how ordinary a person pretends to be, there is so much more to a story than meets the eye. Also, the way the lost gold case and the accident are interwoven, with the two main characters, the police, and the ministry is fantastic. As a result, this is a watch that is highly recommended and well worth your time.

Night Drive - Where to watch?

Yay! The movie is available for streaming online and you can watch Night Drive movie on Netflix. It is not available to buy/ rent online on any platforms right now. 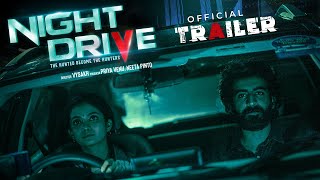