The film opens with Gail Bishop (Regina Hall) taking over as the first Black master at Ancaster College, a distinguished White school in New England. She is a tenured lecturer at the institution and has previously attended it. Gail Bishop's tale is told alongside that of Jasmine (Zoe Renee), a student enrolling in the institution's dorm and her hardships as a woman of colour. In addition to Gail and Jasmine, there's another Black woman, Liv, who is a well-liked professor who is up for tenure. The story centres around these three ladies and their clashes with the ugliness of this old White institution. It depicts the many hardships that each of these ladies has suffered or continues to face in a world where prejudice still exists, and that's what makes the whole thing intriguing. They find it hard to find their way at the said institution. When anonymous racist comments are directed at a Black student who claims to be plagued by spirits from the school's history, each lady must figure out who the true threat is. To find out if it's merely a delusion or not, watch the movie.

Why should you watch Master?

The movie’s author is able to narrate the story well while also including historic terror, supernatural themes, and dark academia. The story is well-written, with three characters each having their own distinct voice. Some viewers may be disappointed by the movie's conclusion, while others may not. However, the message conveyed by this movie is unmistakable: such colleges, which were founded and ruled by white males, are the fundamental foundations of racial inequality and it might be tough to build anything fresh on top of that foundation.

Another feature of the movie is the ensemble. Regina Hall, as always, was fantastic, and her co-star Zoe Renee did an excellent job in her role. It was a tense and wonderfully filmed movie. Apart from that, everyone performed admirably. This movie is a slow-burning drama with a twist on the perils of racism, which is a problem in higher education, but it is still powerful. Overall, the series has all of the characteristics of a horror story set in an academic setting, making it a great watch.

Master - Where to watch?

Yay! The movie is available for streaming online and you can watch Master movie on Prime Video. It is not available to buy/ rent online on any platforms right now. 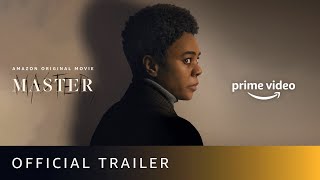