Mandaar, Anirban Bhattacharya's directorial debut, is a dramatic TV series. It is the first show on Hoichoi TV's newly created category 'World Cinema Classics.' The series is a version of Shakespeare's "Macbeth," but with an overpowering colloquial touch, as the tag suggests.

Mandaar (Debasish Mondal) works as a bodyguard for local mogul Dablu Bhai (Debesh Roy Choudhury). A fortuitous prophecy ignites greed and hunger in him and his wife Laili (Sohini Sarkar), propelling him down the path of crime and insanity. You must see the movie to find out how the story unfolds.

Why should you watch Mandaar?

There isn't a single wasted moment in this web series, and you are exposed to how twisted and evil people can be from the start. The series, based on Macbeth, is gruesome and sometimes unpleasant to watch but quite thrilling.

Anirban is the series' co-creator, co-writer, and director, in addition to playing a prominent role. Mandaar is purposely built as a complicated beast, with broad shoulders as well as a thick neck. The camera constantly pictures Mandaar from behind after he murders his superior and becomes the top gun, highlighting his masculinity. He is, however, impotent, which may explain why he can live with other men constantly preying on his wife sexually. Debashish Mondal gives an outstanding portrayal of a distraught goon filled with primordial hatred.

Mandaar (Macbeth) is played superbly by Debasish Mondal. He gives the necessary strength to the character, first as a meek man, then as a man on a mission and blazing by the all-consuming fire of avarice and passion scorching through him. Sohini Sarkar is equally captivating as the mistreated Laili (Lady Macbeth), who makes a passionate play the moment she realises the power she has at her disposal. As the dishonest and greedy officer, Anirban Bhattacharya as ‘Muqaddar Mukherjee’ is lively and mischievous, with a passionate hunger for both food and an easy lay. It's fascinating to see how this actor modifies himself with each job.

Sajal Mondal shines as Mojnu, Macbeth's counterpart of one of the three witches. He portrays a wrinkled old woman, which is a stunning metamorphosis for a man. The remainder of the cast does a respectable job. Subhadeep Guha's background score is outstanding. It's neither too loud nor too quiet, as other recent OTT content has been. It's just right, providing the ideal audio to enhance the creepy atmosphere. Editor Sanglap Bhowmik provides valuable assistance to the production with immaculate editing.

Another incentive to watch this series is that the filmmaking is outstanding, with insanely innovative camera angles. Some of the photos may leave you perplexed as to what you've just witnessed. The narrative hits you with a variety of emotions at various points, but the overall impression is always one of revulsion. Every frame of Mandaar contains immorality, and every character contains vileness. No one is above it, and no heinous deed is beneath it. Anirban merged supernatural aspects with philosophy and reality and transformed one of Shakespeare's finest works into his own. As a result, this one is highly recommended.

Yay! The movie is available for streaming online and you can watch Mandaar movie on hoichoi. It is not available to buy/ rent online on any platforms right now. 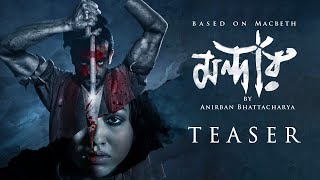 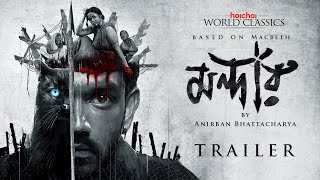