Why should you watch Mahananda?

Mahananda was built with great care and attention to detail. The plot is slow-moving, but the film's appeal is its non-linear narrative, which covers the protagonist's upbringing and youth. Mahananda Bhattacharya is portrayed as a steadfast and unyielding protector of society's vulnerable communities, akin to Mahasweta Devi, who fought the colonial custom of branding such tribes as natural criminals.

In the movie, Mahasweta Devi is called Mahananda. Arindam Sil tried to convey Mahasweta's soul by depicting her as an eccentric, volatile, and erratic character. It starts with Birsa Munda and concludes with Singur and Arindam professing to have operated in a domain where Mahasweta's identity and her existence were fused together. This does not mean, however, imply that the movie is endorsing a certain political group. Furthermore, Sil attempted to make the movie aesthetically attractive to his viewers, as he had done in his prior films. He did so with outstanding cinematography, including fantastic lighting and angels. The movie's visual attractiveness is further enhanced by the night sequences and colour tint.

However, the movie is bolstered by a number of standout performances. Gargi is fantastic as Mahananda; rather than mimicking the real-life figure, she gives the role its own spin, making her a delight to see on camera. Debshankar plays Bidhan, and he merits praise for his Bangal dialect and humour. Mohal and Bihan are two fictional characters performed by Ishaa and Arna, who both did an excellent job in their roles. Overall, this is a must-see movie, both for understanding Mahananda's challenges and for the cast's outstanding performance.

Mahananda - Where to watch? 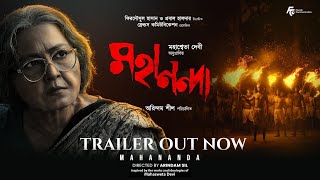