It is a love story of two school-going kids, Rajveer played by Gumam Bhullar and Ronak played by Tania. The tale revolves around their friendship and their sweet and innocent gestures of love. However, they drifted apart due to some circumstances. But years later, they again crossed paths as adults and discovered happiness and tranquillity in the act of letting go.

Why should you watch Lekh?

Lekh is a Punjabi romantic drama directed by Bhanu Thakur and Manvir Brar. From the day this movie was revealed it was sure that this would act upon the said genre, and people who would watch this movie with the same expectation will not be disappointed.

The story of Lekh is created with emotions that will reach our hearts. Jagdeep Sidhu, the director of Qismat, Qismat 2, Surkhi Bindi, and Sufna, has once again cast a spell. This time as the writer. His screenplay and narrative have a refreshing lack of pretence. Jagdeep made an effort to remind us of our first crush, and the things we did to get their attention through his movie Lekh. Additionally, the plot has elements of humour which is refreshing and will make us laugh.  Apart from the punch lines of the lead actors, we can also see a few other humour elements which will give us belly laughs. But the most interesting part of the movie was the climax. It was unconventional, shocking, refreshing, and honest. He did give us a picture of a “happily ever after” but not in the textbook format. Keeping aside Jagdeep Sidhu’s thoughtful writing, the other thing that shined in the movie is the acting skills given by all the characters.

In addition to Tania and Gurnam, Kaka Kautki played an important part in the film. He played Gurnam's father in the movie. This is Kaka's last film before his demise, and we can state without a doubt that he made a great impact on us with his acting abilities and screen presence. Furthermore, Ammy Virk Nirmal Rishi made guest appearances in the movie. After watching the film we can say that Lekh would not have been finished without their involvement.

Enough about direction and acting. Now let’s come to the part which adds soul to Lekh. The music. For all romantic music lovers, you are in for a treat if you look at their soundtrack. From romantic songs to sad numbers, all of them sparkle with melody. Afsana Khan, Jaani, Gurman Bhullar, and B Praak created such a playlist that the next Punjabi movie might lookout its soundtrack.

If unfinished love stories are your thing, then Lekh is just the right movie for you to watch. This movie will take you back to your good old days where once upon a time you might have loved someone but then it didn’t work out. Hence, we can say Lekh is an honest narrative of teenage love that is presented very well by the entire team.

Lekh - Where to watch? 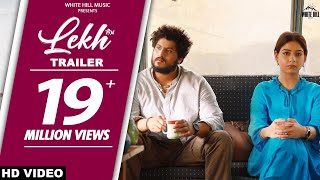 Yes I Am Student
Drama