The plot centres around Maayandi (Nallandi), the village's last farmer. He is a simpleton untainted by contemporary conveniences. A loner who pursues his career not only for a living but also for a sense of oneness with mother nature. However, lightning strikes an ancient tree in the village one day. The locals see this as a terrible omen, and they believe that to avoid disaster, they must pray to their village deity. As the villagers prepare to organise the event, they approach Maayandi with the request that he harvest grains for the special offering because he is the village's lone and only farmer. Maayandi agrees to the request and begins cultivating. After a few days, Maayandi discovers three dead peacocks on his land. He chooses to bury them on his property. What happens the next day, when a police officer arrives in pursuit of Maayandi, is the story's pivot point. So, to find out how the story evolves, you'll have to see it yourself.

Manikandan produced this movie, which stars an elderly farmer named Nallandi, as well as actors Vijay Sethupathi and Yogi Babu in cameos. In recent years, there has been a wave of Tamil movies advocating for farmers and farming, but this film is nothing like other films. It's an ode to idyllic living and self-sufficiency. This film's purpose is pure, and it serves as a virtual eye-opener.

'Kadaisi Vivasayi' is a slow-paced movie, thus opinions have ranged from 'patience tester' to 'soul cleanser.' However, the movie's narrative is consistent enough in that it targets the audience by emphasising the significance of nature. The character and abilities of Nallandi will be remembered forever. His innocence and purity in portraying 'Maayanadi' as priceless. He simply exists and effortlessly delivers his part. Furthermore, Vijay Sethupathi's Ramaiah character is a metaphor that perfectly balances reality, surrealism, and comedy. Furthermore, Yogi Babu's work was excellent and brought dimension to the plot. The movie presents a tranquil rural virtual reality experience.

Another compelling reason to see this movie is because of Manikandan's range of work. He never presses or imposes his thoughts through movies; he just allows them to flow. Overall, we are introduced to an immersive experience that keeps us thinking. Kadaisi Vivasayi is full of ordinary characters that show a lot of generosity. There is also some ordinary hilarity in it, but it is presented subtly, making the viewer feel connected. Furthermore, Manikandan has caught the beauty of rural life and its inhabitants in a way that is beyond words. Overall, the movie is humbling and certainly among the finest of the year. The cinematography is wonderfully executed. It demonstrates that even a simple narrative, when conveyed with exceptional compassion, may have a lasting impact. It's a hidden treasure of a movie that you should see.

Yay! The movie is available for streaming online and you can watch Kadaisi Vivasayi movie on Sony Liv. It is not available to buy/ rent online on any platforms right now. 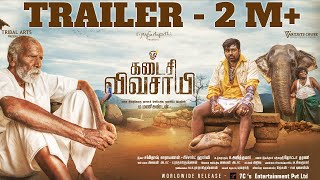