The movie is a horror comedy about the descendants of two men, Sethupathi and Senathipathi, who deceived and duped a royal family into committing suicide thousands of years ago. The only survivor is the family's son, whom Sethupathi tries to kill but is persuaded to save by Senathipathi. At the present, they are involved in events involving spirits, vengeance, and kidnapping.

Smitha (Nikki Galrani), a psychiatric doctor, is abducted and taken to a haunted house, and her patient, Chinraasu "Paandi" (Shiva), rushes to her aid. In addition, there is a group of four goons within the house, as well as a few ghosts. You'll have to see the movie to find out whether Smitha was saved safely from nefarious powers.

Why should you watch Idiot?

The movie begins in the manner of a historical drama, with a royal family being betrayed by two of their subordinates. It's a lighthearted family film with more humour than horror. Rambhala of Lollu Sabha and Dhilluku Dhuddu fame is the director. Nikki Galrani plays the female protagonist in the movie, with Anandaraj, Redin Kingsley, Ravi Mariya, Urvashi, Akshara Gowda, and RNR Manohar in the supporting roles.

Shiva plays the character really well since it is a piece of cake for him. Redin Kingsley contributes a few chuckles throughout the film, while Anandaraj stands out among the supporting cast members. In terms of background music, it is somewhat similar to the score from other well-known films. Nevertheless, the editing and cinematography contributed to the movie visually. But, again, it lacked continuity. Overall, this is a family-friendly movie with nonstop hilarity. If you love viewing movies with similar themes, you should give it a shot.

Idiot - Where to watch? 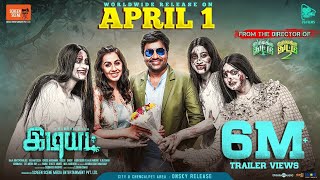