The narrative takes place in Allahabad in 1990, with Daddu (Sunny Kaushal) as an ambitious IAS officer and Jhulan as his love interest (Nushrratt Barucha). He is also a student leader who is outraged by the Mandal Commission's implementation and vows to challenge the caste-based reservation system. Daddu's status as a student leader has an influence on his love life, which has a lot of ramifications. Watch Hurdang to learn more about Dadu's position as a student leader and how his protest against caste-based reservation affected his relationship with Jhulan.

Why should you watch Hurdang?

Over the years, we have witnessed many movies on politics. But, Nikhil Nagesh Bhat’s Hurdang appears to be one of the depictions of student politics in the 1990s, which would create no impact on the audience. The movie is fueled by caste and class divisions, which are relevant even today. However, it lacks some necessary elements. It takes a lot of research on essential topics to make films like these. These movies should highlight the events happening around that time, as well as the setting behind the main events of the era. Though Hurdang tried to grasp the important aspects, it seems like it didn’t deliver the message as it thought it would.

The film runs for 122 minutes and narrates a love story against the premise of a student protest that was happening in Allahabad (present Prayagraj). The plot of the film dates back to 1990 when students were protesting against the implementation of the Mandal Commission report. Unfortunately, neither the backdrop has been properly researched and executed. Nor is the love story been sketched in a way that would make your insides churn. The movie doesn’t even dig deeper into the reasons why the Mandal Commission was implemented, which is again an attribute of half research. Moreover, the film lacked nuance.

Though all the actors played their bit perfectly, their performance seems limited due to the written material. It's difficult to overlook the fact that an artist like Vijay Verma didn't have a good character to portray, an arc to show, or that Sunny and Nushrratt didn't have enough to enhance their performances. Issues such as continuity leaps and jargon that change every few seconds stick out like a sore thumb.

If the backdrop of the movie was well-researched and used more effectively, visually and otherwise, the movie would have had more layers in its approach. Also, with proper research and convincing visuals, Hurdang would have had more etched out personas, stronger resolutions, deeper conflicts, a little humour, and a clear and strong message that would travel in the country and beyond.

Though the performers tried their best to bring out the best in their characters (which they did), Hurdang’s writing department was quite disappointing. As mentioned earlier, if they had conducted extensive research work, the film might have been promising.

All in all, we can say that Nikhil Nagesh Bhat’s Hurdang relied on half researched topics and sloppy writing. Though the actors gave their best the movie, as a whole, lacked to convey a message to the people.

Yay! The movie is available for streaming online and you can watch Hurdang movie on Netflix. It is not available to buy/ rent online on any platforms right now. 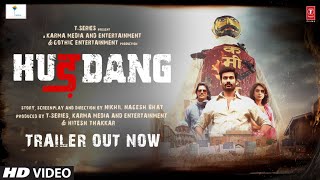