The film Hey Sinamika is the story of Mouna (Aditi Rao Hydari) and her software engineer turned househusband Yaazhan (Dulquer Salmaan). In the beginning, they fall for each other and plan to marry but in two years Mouna gets frustrated with the incessant attention she gets from her husband 24*7. He even turns up in her office area to take care of her. She is all fed up with his continuous talking and complaining. This forces her to hire a therapist Malarvizhi (Kajal Agarwal). She seeks her help to persuade him to fall out of love with Mouna and love Malarvizhi instead. And then comes the unexpected turn of the plot. To know if the plan works and what turns come into play you need to watch the interesting movie ASAP!

Why should you watch Hey Sinamika?

If you are into light-hearted entertaining dramas then Hey Sinamika is definitely your cup of tea. The movie is the directorial debut of Brinda a famous choreographer down south. The first half of the movie is filled with comedy, fun and frolic. Initially, it is all about Mouna planning and plotting with her colleague Ram (RJ Vijay) to stop her husband Yaazhan from being all witty and chatty. Dulquer Salmaan has done justice to the character by hitting the right tone. It could have been too irritating for the audience but he managed to hit the right chords at the right time. The chemistry between Mouna and Yaazhan is also something to look out for.

It is a story by Madhan Karky which is obvious by the plot as it has similarities with his real-life events. From Mouna’s education (weather scientist) to couples divorcing in the long run it has a lot to do with him. But by the second half of the movie, it gets emotional and touchy. But Brinda has managed to set a tone here as well. Besides, the choreography is also commendable which is not a surprising part as the whole movie is directed by choreographer Brinda.

The songs have already set their feet in the hearts of thousands. And the cinematography is quite appreciable. From the scenes at home and around the cityscapes to the beautiful beach all of them will leave a mark on your mind. Cinematographer Preetha Jayaraman has portrayed magnificently. Overall, the storyline is for everyone. You can watch it with friends as well as with family. Why not take a little time out from your busy schedule and indulge in the same?

Hey Sinamika - Where to watch?

Yay! The movie is available for streaming online and you can watch Hey Sinamika movie on Netflix, Jio. It is not available to buy/ rent online on any platforms right now. 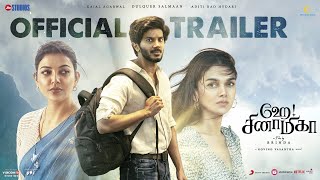