Kanneganti Gopala Rao is an atheist who owns a shop that sells Hindu idols and is survived by his wife Meenakshi and son Moksha apart from his in-laws and assistant Otthu. Once, he obstructs a holy ritual involving his family along with others conducted by Siddheswar Maharaj, a fake godman. A sudden earthquake causes a huge devastation and his shop gets completely demolished. Rao approaches his insurance company who turn him down terming it as an act of God. Left with no choice, Rao decides to sue God in turn and after failing to find a lawyer for such a lawsuit, he meets Akbar Bhai, a disabled lawyer who helps him file the case as Rao decides to fight on his own. Legal notices are sent to the insurance company as well as to religious priests, Siddheshwar, Gopika Matha and their group's founder, Leeladhara Swamy summoning them to the court as representatives of God on earth.

Gopala Gopala - Where to watch? 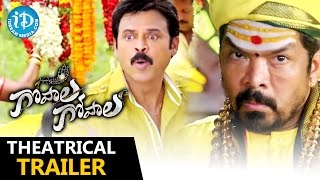