The story is about a young woman named Sakhi (Keerthy), who supposedly brings bad luck to everyone including herself. People around her believe she is unlucky because on her wedding day, her fiance dies. But then to turn her luck around, she undergoes training as a sharpshooter and competes at National-level. Does her bad luck turn into good luck? To know more you need to watch Good Luck Sakhi.

Why should you watch Good Luck Sakhi?

Director Nagesh Kuknoor who is known for making films like Iqbal, Dor, and Hyderabad Blues, has made his directorial debut in the Telugu industry, with Good Luck Sakhi. People who have seen his movies before will be excited about this particular storyline being a sports drama. What else is exciting? This movie is female-oriented at its core.

The main character, Sakhi, is played by Keerthy. Sakhi is a 25-year-old woman who is from a little village. The maker personifies her as a black cat, bringing bad luck to everyone. Her family tried to get her married five times, but all these attempts are in vain. Also, all her fiances meet with terrible circumstances. Apparently, Sakhi is unaffected by all this and she goes on with her life. Meanwhile, we can also see Sakhi have a penchant for ‘golis’, both playing and shooting.

Here we are also introduced to a character, Goli Raju (Aadhi Pinisetty) who is a childhood pal of Sakhi. And they used to play marbles together (hence the name). When he grew up became a theatrical performer and goes by the name Rama Rao, the late NTR. He also aims to make it famous someday and is now the Zilla's superstar. Soori (Rahul Ramakrishna) is another childhood buddy who doesn't seem to comprehend the concept of "no" and is always hitting on Sakhi. Also, in front of his wife (Divya Sripada). The plot takes an interesting twist, when Colonel (Jagapathi Babu), an ex-Army guy, appears out of nowhere in the village to establish a sharpshooting institution. Given Sakhi's fondness for golis, Raju asks her to try it out.

Coming to performances, Keerthy does an excellent job as Sakhi, and you can tell she gave the film her all. Aadhi, Jagapathi Babu, as well as Rahul Ramakrishna, are as trustworthy as ever.

The movie has a tight opening that will draw audiences’ attention. Devi Sri Prasad’s song Bad Luck Sakhi plays out almost like a musical on a Broadway show and you’re hooked. In terms of cinematography, Chirantan Das gave his best. However, the film’s sound design and editing were a little disappointing. Scenes stop quickly, and conversation is often barely heard. It appears that the film was shot with sync sound, which did not work out well.

Nevertheless, Good Luck Sakhi is a fun-to-watch movie with ample humour and a purpose. So, if you have seen Nagesh Kuknoor’s previous work, you can watch this one too.

Good Luck Sakhi - Where to watch?

Yay! The movie is available for streaming online and you can watch Good Luck Sakhi movie on Prime Video. It is not available to buy/ rent online on any platforms right now. 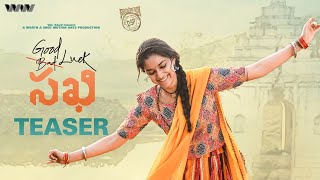 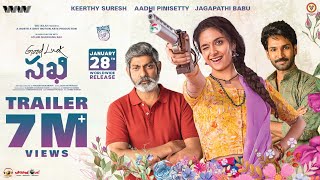 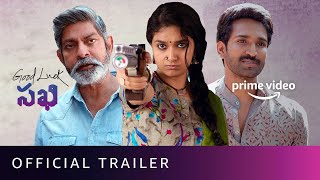