Father Stu is an honest story based on real events. The story is about an amateur boxer who wants to change his career and become a priest. This story has its laughs and yet portrays its honest truth. A man navigates through his life to find the purpose that takes him to an unexpected place. He is quite determined about his boxing career but an injury knocks him off of his path.

The character of Stuart Long is played by Mark Wahlberg. He continues his life as a clerk of the supermarket and meets Carmen aka Teresa Ruiz. Carmen is a Sunday school teacher and is not quite smitten by the bad boy charms. Here's a twist, in order to woo her, Stuart starts going to the church too. But his accident makes him realise that he has got a second chance at life. He feels that he needs to use this opportunity to help others. Therefore this marks his journey to become a priest. This is an inspiring story of Stuart who regardless of his health conditions is very compassionate about his newfound purpose.

Why should you watch Father Stu?
There are various reasons to watch this movie. Apart from its inspiring narrative, It is artistically well made. The screenplay has been written by Rosalind Ross. The cast includes Mark Wahlberg, the Academy Award Nominee, Mel Gibson, Jacki Weaver, and Teresa Ruiz. The star cast is seriously accredited a number of times.

In the movie, we go back and forth seeing Stu as a child and an adult. As a child, he wanted to impress his father as Elvis Presley. And then skip ahead to Stu as a boxer who gets injured a lot. Such montages and the cinematography hooks you into the movie.  You must watch this movie to see the agony the protagonist goes through to fulfil his purpose. You see hints of his future in the initial scenes themselves. How he connects with people and makes them feel comfortable says a lot about his character.

Father Stu - Where to watch? 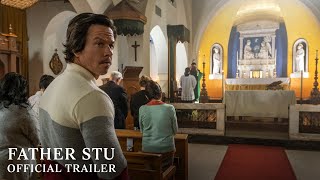