During WWII, the death camp at Treblinka had an escape, causing the Commandant at a similar camp in Sobibor to vow (actually threaten) that his camp would never experience the same thing. But those who were its captives, the Jewish laborers that had been spared from the ovens, knew that they were on borrowed time and that their only hope was to escape... the only question was how to do it. On October 14, 1943, members of the camp's underground resistance succeeded in covertly killing eleven German officers and a number of Ukrainian guards. Of the 600 inmates in the camp, roughly 300 escaped, although most were later re-captured and killed. The escape forced the Nazis to close the death camp, dismantling it and planting a forest.

Escape from Sobibor - Where to watch?

Yay! The movie is available for streaming online and you can watch Escape from Sobibor movie on Tubitv. It is not available to buy/ rent online on any platforms right now. 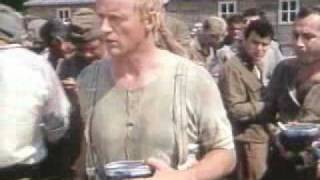