Dynamite is a Telugu action thriller film directed by Master Vijayan, Manchu Vishnu and also guest directed by Deva Katta for 9 days of the shoot, the film is produced by Manchu Vishnu under the banner 24 Frames Factory featuring himself, Pranitha Subhash, J. D. Chakravarthy in pivotal roles. It is the official Tamil remake of Arima Nambi. Stunts and actions co-ordinated by Vijayan who also directed the film along with Vishnu Manchu after Deva Katta walked out of the project due to creative differences. Directed by Deva Katta. Starring Vishnu Manchu, Pranitha Subhash in lead roles.

Dynamite - Where to watch?

Yay! The movie is available for streaming online and you can watch Dynamite movie on Prime Video, Hotstar, Sony Liv. It is not available to buy/ rent online on any platforms right now. 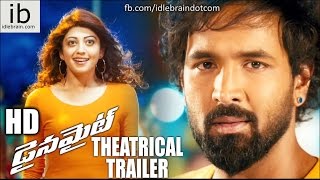