A champion runner, Vishnu aka Aadhi Pinisetty, was involved in a car accident and lost his leg. He lives a mundane life with Mithra aka Aakanksha Singh (wife), who works at an IT firm. He learns about Bhagyalakshmi aka Krishna Kurup (state-level runner) one day and helps her prepare for the nationals. However, SAA president Venkatram (Nassar) places obstacles in Vishnu's path. What transpired between Vishnu and Venkatram? Was Bhagyalakshmi crowned national champion? You must see the movie to find out the answers to these.

Why should you watch Clap?

Clap, like many other sports dramas, has a similar setting. Watching enough sports movies will give you an idea of what to expect. There is nothing more or less and works in the storyline’s favour since it prepares you for the gradual ups and downs. Further, what makes the film interesting is how Vishnu overcomes his troubles and helps Bhagyalakshmi win the championship. Aadhi performs admirably as an amputee athlete, and Krishna Kurup also does well. He effectively conveys the agony as well as the self-doubts of a differently-abled individual. Even when he is resistant, he makes you sympathise with his predicament and makes it easy to cheer for him. Krisha Kurup, on the other hand, portrays a bright young athlete. Her sensitivity pours through, and she's incredibly convincing as the rural girl.

Aakanksha Singh is fantastic in her role. Her silence deepens the antagonism between the two protagonists. It was a great touch to include her in the crucial conclusion. Nassar makes his imprint once more by giving his all. But what Nassar achieves within his restricted scope is remarkable. He portrays the stereotypical movie villain and adds his touches to make us exclaim. Munishkanth, too, rises beyond sports cliches to deliver a spectacular performance but compared to his prior performances, it's much more restrained. Mime Gopi, too, executes her job well. The same can be said for Prakash Raj, who has a natural acting style.

Director Prithvi portrays the politics that occur during the choices in a realistic manner. The cinematography and soundtrack are both stunning, and they help to elevate the movie. Overall, Clap is a good sports movie with some outstanding performances by Aadhi and Krisha Kurup. It's a slow-paced flick with predictable plot twists that may bore you somewhat. But, if you're comfortable with the budding storyline then, give it a go.

Clap - Where to watch?

Yay! The movie is available for streaming online and you can watch Clap movie on Sony Liv. It is not available to buy/ rent online on any platforms right now. 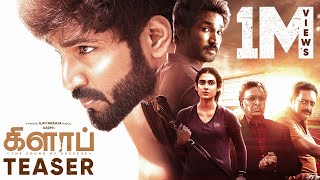 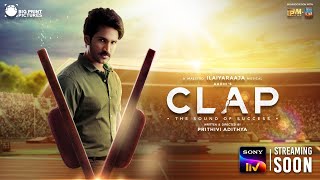 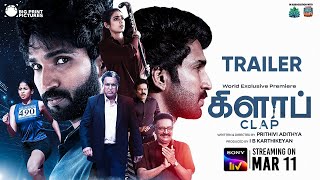