Chennaiyil Oru Naal is Tamil thriller film written by brothers Bobby and Sanjay and directed by Shahid Khader. On September 16, superstar Gautham Krishna (Prakash Raj) gets ready for the release of his new film. On the same day, Traffic Constable Satyamoorthy (Cheran) joins back on duty, after having been suspended from service for taking bribes. The day is special for Dr. Robin (Prasanna) who is celebrating his first wedding anniversary. Karthik Vishwanathan (Sachin), an aspiring television journalist, starts his first job with an interview with Gautham Krishna the very same day. On the same day, at a crowded traffic junction in Chennai, Karthik, who was set to interview Gautham Krishna, and Ajmal (Mitun), traveling in a bike are hit by a speeding car at the signal, and Karthik is rushed to Global Hospital. Also at the junction, in another car, was the surgeon Dr. Robin. Karthik goes into coma and is declared brain dead although he is kept alive using ventilator.

Chennaiyil Oru Naal - Where to watch? 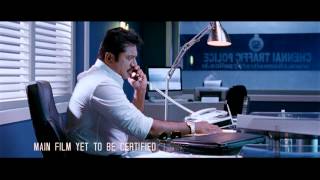