The craze for the latest Marathi movie is not hidden from anyone. It is surely the topic of discussion these days. This movie is based on the popular novel written by Vishwas Patil. The adaptation of a 300-page novel into entertaining screenwriting is a herculean task. The makers of Chandramukhi have successfully captured the essence of the book and delivered an uncanny portrayal of the plot.

The movie is centered around the idea of forbidden love and all the unpleasant events that follow. The story is about a politician, Daulat Deshmane, who is quite successful and is next in line to become India’s cabinet minister of commerce. However, things take a surprising turn when a photo of Daulat Deshmane with a tamasha dancer surfaces. Daulat Deshmane is happily married at this point, so the photo could ruin his chances of becoming the minister.

This photo opens up the politician’s past, and the audience is introduced to the love story of Daulat and Chandra. The story of the past starts with a hesitant first meeting between the two of them. Gradually, the plot develops to show how Daulat and Chandra become seriously involved with each other. The attention to detail in the movie is something to watch out for. The object of the movie is to show the social repercussions when this forbidden love story surfaces.

Why should you watch Chandramukhi?

It is safe to say that screenwriter Chinmay Mandelkar has done a commendable job in bringing the essence of Vishwas Patil’s novel to life. Chandramukhi is dual-paced. The first half is slow, which provides for character build-up, while the second half is more or less fast-paced. The director Prasad Oak leaves no stone unturned in providing a detailed introduction of his characters.

Moreover, he establishes the relationship between the characters beautifully. This has led to some extra scenes, but if you have a knack for cinematography, you won’t mind it. Some of the scene transitions in the first half may seem forced, but they all add up in the end. Also, special effects may seem redundant, but if you have read the novel, you will enjoy the characters coming to life.

Once you sit through the slow first half, which beautifully captures the love story, you will be rewarded with a scintillating second half, which has all the political drama, thriller, and plot twists.

The female lead Amruta Khanvilkar leaves a strong impression in her debut movie. Her impeccable preparation for the role is clearly visible in her scenes. For the reader audience, Amruta’s character may seem a bit uptight, and they might expect a bit more raw element and crispier body language, but overall she has done a commendable job. Addinath’s portrayal of Daulat is spot on too. He flawlessly brings out the coconut macho persona. The supporting cast’s work is worthy of appreciation too. All of them have come through to deliver a memorable performance. Overall, Chandramukhi represents the pinnacle of Marathi cinema and makes up for a decent watch.

Chandramukhi - Where to watch?

Yay! The movie is available for streaming online and you can watch Chandramukhi movie on Prime Video. It is not available to buy/ rent online on any platforms right now. 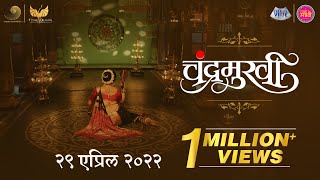