In Big Time Movie, the guys must tap their inner spy as their adventure finds them driving exotic cars and jumping out of helicopters, while trying to make it to their first world tour concert on time. Hot on their trail are evil henchmen named Maxwell, British secret agents and Swedish spies as well as billionaire businessman, Sir Atticus Moon who wants back his precious device code named: “The Beetle,” an anti-gravitational device with enormous power. Once they learn they’re carrying this precious cargo, the guys get pulled into a madcap mission throughout London, which threatens the onset of their world tour. With the help of teen spy Penny Lane, the guys set out to save Penny’s father MI6 Agent Simon Lane and stop Sir Atticus Moon’s plot to use “The Beetle” to gain world domination (Nickpress).

Big Time Movie - Where to watch? 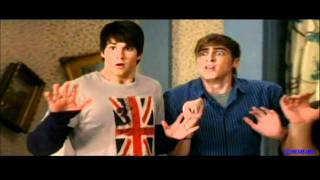