The documentary is about the devastating calamity which shook Bhuj back in 2001. Bhuj is a city in Gujarat where a horrific earthquake took over 20,000 lives. This was a terrible day when a whole country was shaken. The incident is revealed through the powerful and excellent storytelling skills of veteran actor Mr. Anupam Kher. This documentary shows the experiences of the people who have been victims of this massive disaster. The documentary further displays the darkness that revolved around these people and how they struggled to make their way out of this distress. Basically, Bhuj: The Day India Shook is a real-life story of chivalry, heroism, failure, adversity, reliance, and expectancy. The teaser of this documentary (shared on the actor’s social media account) is enough to shake you inside out. Some glimpses of the victims are depicting the pain and struggle they had to face. How the tragedy brought so much grief is the main storyline of the documentary. Watch this documentary to know how the natural calamity changed the lives of the natives.

Why should you watch Bhuj: The Day India Shook?

Bhuj: The Day India Shook is a powerful documentary that leaves a lasting impression upon you. The documentary has rendered all detailing accounts of that fateful day. The main features of the piece are archival footage which includes newspapers, headlines, videos, and photographs. Apart from that, there are satellite images that effectively demonstrate the time of the incident. It will also highlight the ordeal of the survivors. After twenty years of the terrible event, the documentary renders well and succeeds in retracing the footprints of the mishap.

If we talk about the characters, the dialogue delivery of Mr. Anupam Kher leaves a lasting impact on your conscience. The location where the actor is spotted in the series is fit for the situation. It really gives you the feeling of damage and destruction caused by earthquakes. The rest of the seen characters are real whose words will compel you to live their emotional and tough journey of an unforeseen disaster. The storyline is very well rendered by director Jayesh Nilewad.

Overall, the documentary delivers a better-than-expected message of hope and desire.

Bhuj: The Day India Shook - Where to watch? 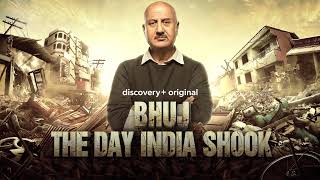