Bengal Tiger is an upcoming Telugu film written and directed by Sampath Nandi and produced by K.K. Radha Mohan under the banner Sri Satya Sai Arts. It features Ravi Teja, Tamannaah and Rashi Khanna in the lead roles while Boman Irani, Rao Ramesh and Sayaji Shinde appear in crucial supporting roles. Bheems Cecireleo composes the film's soundtrack and Soundararajan handles the cinematography. Production began on 30 January 2015 at Ramanaidu Studios in Hyderabad and principal photography began on 4 March 2015. The film is scheduled for a worldwide release on 5 November 2015.

Bengal Tiger - Where to watch?

Yay! The movie is available for streaming online and you can watch Bengal Tiger movie on Zee5, Hungama, Eros, Hotstar, SunNxt. It is not available to buy/ rent online on any platforms right now. 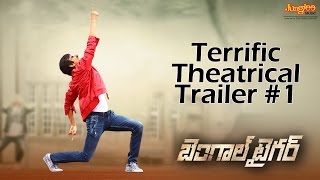