The plot centres around two members of the LGBTQ+ community who agreed to a convenient arrangement to be accepted in society. Shardul Thakur (Rajkumar Rao) is an inspector stationed in Dehradun who is continuously pressured to marry but refuses since he is gay. Suman "Sumi" Singh (Bhumi Pednekar), a high school physical education teacher, is also under pressure to marry, but she's a lesbian. After a sequence of circumstances, both the main characters meet and agree to a lavender marriage to appease their overbearing families, as well as to live parallel and socially suppressed lifestyles as closeted members of the lesbian and gay community. According to their analysis, they believe this will provide them with coverage while yet keeping their personal lives secret. One must see the film to find out how the plot evolves and what problems the couple encounters after agreeing to a marriage of convenience.

Why should you watch Badhaai Do?

The movie has a unique narrative that deals with numerous societal stigmas and scrutiny, faced by LGBTQ+ people. It begins as a romantic comedy and ends with a stunning build-up that leaves you speechless. The link between each protagonist's love interest was depicted in a nice, non-stereotypical style that did not include any unwanted sexual encounters.

This is an outstanding movie that captures the challenges of the LGBTQ+ community in a society that continues to reject them the way they are. It also depicts how societal expectations lead such persons to get into lavender relationships to escape society's grasp. A lavender marriage/relationship is used to describe a marriage/relationship between a man and a woman in which one or both of the partners are homosexual. Usually, but not always, both parties are thought to be engaged in a public falsehood to conceal their homosexuality. Director Harshavardhan Kulkarni handled societal concerns delicately, balancing them between humour and emotions.

Apart from the major characters, Sheeba Chaddha and Seema Bhargava were excellent as Rajkumar's mother and aunt, providing hilarity with straight faces. Despite the gravity of the themes covered, they kept the movie's premises light and breezy. The odd couple's respective partners Gulshan Devaiah and Chum Darang also did a fantastic job, smoothly delivering their parts.

Furthermore, the movie's soundtrack, composed by Amit Trivedi, Ankit Tiwari, Tanishk Bagchi and Khamosh Shah, contributes significantly to the plot's levity. The songs were brilliantly crafted and accurately portrayed the emotions the characters were experiencing.

Overall, the movie is ideal because it conveys the societal stigma subtly without sacrificing entertainment or plot. The story s a must-see for everyone since it shows how the LGBTQ+ community deals with challenges in their daily lives.

Badhaai Do - Where to watch?

Yay! The movie is available for streaming online and you can watch Badhaai Do movie on Netflix. It is not available to buy/ rent online on any platforms right now. 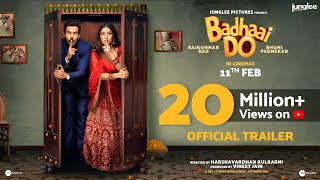