Deva (Surya Sivakumar) arrives at the Chennai International Airport after running an errand for Arumuga Dass (Prabhu Ganesan) of smuggling pre-release pirated movies on DVD. The two leave for their hideout and instruct Dilli (Karunas), a hearing-impaired assistant of Dass, to make copies of the DVD. Just when police crews arrive into their vicinity, Dass informs Deva and the rest to leave. Deva tells the others to leave while he quickly sets up the burning process. Deva also leaves the hideout just in time. However, the police officers arrive at the hideout, only to see the burning process of the DVDs complete. The police then seize the DVDs and computers. The inspector, who was a friend of Dass, tells him that he can close the case if one of Dass's men agrees to the crime. Deva attempts to go, but another man, Chitti (Jegan), who had no affiliation to them volunteers, takes the blame. Later, Chitti joins Dass's group.

Ayan - Where to watch? 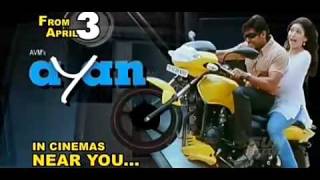