Synopsis
The plot begins with Rinku Suryavanshi (Sara Ali Khan) being pursued by family goons while attempting to flee her house with her lover. She is apprehended by her grandmother, who organised her forced marriage by kidnapping a groom named S. Venkatesh Vishwanath "Vishu" Iyer (Dhanush) to take Rinku off her hands. They both marry when inebriated. Rinku tells Vishu about her long-time lover Sajjad Ali-Khan once she is out of her harsh family. Vishu, on his part, informs her that he is about to marry his longtime lover, Mandy (Dimple Hayathi). What follows is a love triangle, unlike anything the audience could imagine involving Rinku, Sajjad, and Vishu. Atrangri Re's plot is heavily reliant on imagination, and there is a tremendous twist that justifies the film's title. To discover what that twist is and how it developed afterwards, one must watch the film.

Why should you watch Atrangi Re?
Atrangi Re, directed by Ananda L.Rai, centres on a love triangle, but not an ordinary one. Himanshu Sharma maintains true to the title by creating characters and settings that are so bizarre that no one can predict how the plot will proceed. The storyline focuses on a particular character's post-traumatic stress disorder (PTSD) accompanied by tormented pain.

In addition, the film includes two established actors, Akshay Kumar and Dhanush, as well as Sara Ali Khan, who is currently creating her path in the industry. This movie was primarily a test for Akshay Kumar in the role of a supporting actor. In contrast to Akshay Kumar's character, who is a humorous, jester, eccentric madman who concocts tricks from his magician hat, Vishu's role is humble and probably the movie’s strongest point. Sara Ali Khan's persona is one of the most difficult to crack, and she excels in several sequences with colourful remarks.

The common thread that connects the three characters is love. And Rai's script has always been his strongest suit, bringing life to even the most mundane dialogues through his characters. Ananda L. Rai makes it a point to keep the mystery alive by improvising things as he nears the finish line. He constantly strives to strike a suitable balance between fun and humour, but Atrangi Re remains his most distinctive attempt at conveying a narrative.

Another reason to watch this movie is that it solely focuses on loss, trauma, sorrow, love, and how a person traverses through life and copes with what life has to offer. The movie depicts a nonlinear point of view while remaining true to the primary plot. It is worth watching because of its odd and distinctive narrative, and one should never be afraid to embrace the new.

Atrangi Re - Where to watch?

Yay! The movie is available for streaming online and you can watch Atrangi Re movie on Hotstar. It is not available to buy/ rent online on any platforms right now. 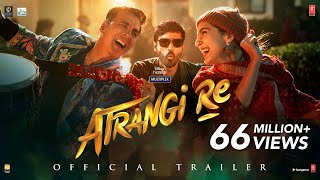