Antim: The Final Truth has a solid script that revolves around Rahul (Aayush Sharma), a youngster from a small town who ends up becoming one of Pune's most feared land mafias. He was the son of a poor farmer who had lost everything due to debts and coercion. After witnessing his father's exploitation, he realises that good deeds will not get him far and ends up becoming a feared gangster. The entire narrative centres on how a jobless youngster became a fearsome land mafia, estranged from his conscientious father. Furthermore, how Inspector Rajveer Singh (Salman Khan) fights to rid the city of everything evil, from power-hungry politicians to raucous rapists to gun-wielding gangsters. You'll have to see the movie to find out how the narrative progresses.

Why should you watch Antim: The Final Truth?

Director Mahesh Manjrekar plays an alcoholic and keeps the story simple yet riveting. Manjrekar masterfully captures the flavour of rural and urban Maharashtra, with the assistance of Karan Rawat's engaging photography.  Also, you will get to experience great scenes typified by sweeping wide-angle images, that brilliantly portrayed the city's continuous expansion.

Furthermore, Salman Khan's character is pretty distinct. His entrance is, as always, spectacular. He spoke his lines well and performed admirably in the action moments and gives the movie his unique flavour. In this film, Salman Khan plays a police officer who is not shown as a supercop as in any of his other movies but rather works in a rational and intellectual manner. His earnest and intense acting make for a nice ride.

Ravi Basrur's background music is outstanding and exhilarating, complementing Salman Khan's persona. The return of Salman Khan to the big screen after a lengthy absence makes it noteworthy. Aside from that, Aayush Sharma was excellent in his performance. He did a terrific job in the movie and conveys his feelings to the audience in a very effective manner. Furthermore, his body language and line delivery are reminiscent of Sanjay Dutt's portrayal of a young man caught up in a web of crime and forced to choose between good and wrong.

The movie's climax scene is superbly crafted, and its twist and presentation make an impression on the viewer. The storyline also addresses the topic of land grabbing by criminals or mafias, who effectively bend rules since they often work hand in hand with politicians. Overall, Antim: The Final Truth features a strong performance, great background music, and a mass audience appeal, making it a must-see. If you enjoy action and mass-production movies, this is the one for you.

Antim: The Final Truth - Where to watch?

Yay! The movie is available for streaming online and you can watch Antim: The Final Truth movie on Zee5. It is not available to buy/ rent online on any platforms right now. 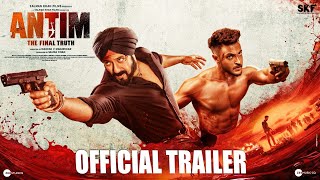