A Thursday is an intriguing hostage drama. It is a story of a playschool teacher Naina Jaiswal (Yami Goutam) in Colaba. She cold-bloodedly kidnaps 16 children of her school and keeps them hostage. In the process, she unintentionally has to keep a driver and a maid hostage who enter the site unplanned. The motive of Naina is unknown to anyone but she has a few demands, if these demands are not fulfilled she would kill the children alphabetically. Initially, it seems like a case of a psychopath as evidence show that she has been through psychiatric treatment from childhood. The case is handled by a pregnant inspector Catherine (Neha Dhupia) along with deputy inspector Javed (Atul Kulkarni). They flap around in disarray to understand the motive of Naina (the kidnapper). The dismal plead of the parents force the police team to do all the arrangements. But the final plead of Naina is a personal call with Prime Minister Maya Rajguru (Dimple Kapadia). Will her demands be fulfilled, will she have a one to one talk with the Prime Minister. To see the mystery getting solved you need to watch the film.

Why should you watch A Thursday?

If you have a knack for suspense movies then A Thursday should be on your bucket list. It is one of the rare woman dominated thrillers in Bollywood, directed by Behzad Khambata. On the acting part, all the actors have done a tremendous job. Yami Gautam has managed to break her quintessential girl next door image with this movie. On Neha Dhupia’s part, the hardcore police inspector look has surely caught the glances of many. Atul Kulkarni as expected did a marvellous job on his part. The rollercoaster of emotions was portrayed effortlessly by him.

The transitions in the movie were well captured. Every character and their emotions were portrayed well. In the beginning, Naina starts her death game by asking for inspector Javed and here is when the suspense began. Why did she choose Javed out of such a huge network? The suspense kept on increasing with the emergence of new demands. The film became further engaging when she killed a child when one of her demands was not fulfilled. Thus bringing the psychiatric issues upfront to the investigators.

The movie has depicted a sensitive issue beautifully. It has a lot for society to realise and learn. When it comes to filming, the birds-ey view shots are captured tremendously. Not a lot was kept for the cinematographer's part but Siddharth Vasani and Anuj Dhawan the cinematographer duo have managed to keep the levels high with their intricate captures.

A Thursday - Where to watch?

Yay! The movie is available for streaming online and you can watch A Thursday movie on Hotstar. It is not available to buy/ rent online on any platforms right now. 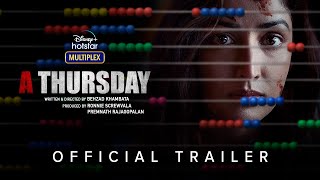 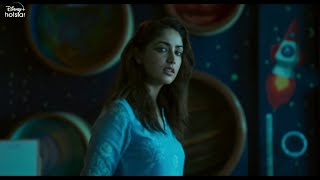