During the trial of a man accused of his father's murder, a lone juror takes a stand against the guilty verdict handed down by the others as a result of their preconceptions and prejudices. The film is adapted by Reginald Rose from his own 1957 film version (directed by Sidney Lumet) and from the Westinghouse One television production that predated it. George C. Scott won a Golden Globe for his supporting role; righteous juror Jack Lemmon was denied such an honor for Best Actor, but recipient Ving Rhames (for Don King) dedicated his award to Lemmon. 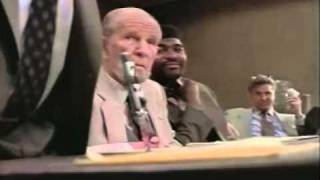